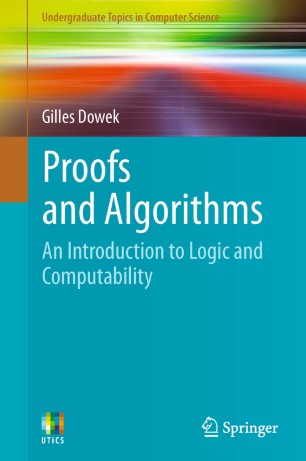 An Introduction to Logic and Computability

Proofs and Algorithms: An Introduction to Logic and Computability

Logic is a branch of philosophy, mathematics and computer science. It studies the required methods to determine whether a statement is true, such as reasoning and computation.

Proofs and Algorithms: An Introduction to Logic and Computability is an introduction to the fundamental concepts of contemporary logic - those of a proof, a computable function, a model and a set. It presents a series of results, both positive and negative, - Church's undecidability theorem, Gödel’s incompleteness theorem, the theorem asserting the semi-decidability of provability - that have profoundly changed our vision of reasoning, computation, and finally truth itself.

Designed for undergraduate students, this book presents all that philosophers, mathematicians and computer scientists should know about logic.

Gilles Dowek is a Professor at École Polytechnique. He is also a Researcher at the Laboratoire d'Informatique de l'École Polytechnique and the Institut National de Recherche en Informatique et en Automatique (INRIA). His research concerns the formalization of mathematics and the mechanization of reasoning. His main contribution is a reformulation of the axiomatic method which provides a central role to the notion of computation.

“This work examines when the application of an algorithm can replace the construction of a proof. … focuses on establishing that provability is undecidable in predicate logic (Church’s theorem). The text generally consists of propositions followed by proofs, with commentary, examples, and exercises interspersed. … The book would be of interest to those with adequate background. Summing Up: Recommended. Graduate students and above.” (J. R. Burke, Choice, Vol. 49 (1), September, 2011)

“Mathematical logic is a challenging subject for many students. … this book, with its focus on the nature of proofs and algorithms and their relationship, appears to be targeted precisely for such an audience and should appeal to computer scientists and philosophers … . this book remains an introductory book on mathematical logic suited for a beginning graduate course in logic. … Its conciseness makes it well suited for a one-semester graduate course.” (Burkhard Englert, ACM Computing Reviews, February, 2012)