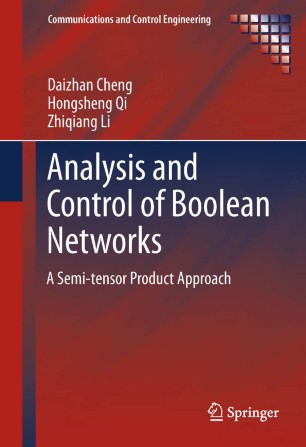 Analysis and Control of Boolean Networks

The Boolean network has become a powerful tool for describing and simulating cellular networks in which the elements behave in an on–off fashion. Analysis and Control of Boolean Networks presents a systematic new approach to the investigation of Boolean control networks. The fundamental tool in this approach is a novel matrix product called the semi-tensor product (STP). Using the STP, a logical function can be expressed as a conventional discrete-time linear system. In the light of this linear expression, certain major issues concerning Boolean network topology – fixed points, cycles, transient times and basins of attractors – can be easily revealed by a set of formulae. This framework renders the state-space approach to dynamic control systems applicable to Boolean control networks. The bilinear-systemic representation of a Boolean control network makes it possible to investigate basic control problems including controllability, observability, stabilization, disturbance decoupling, identification, optimal control, etc.

The book is self-contained, requiring only knowledge of linear algebra and the basics of the control theory of linear systems. It begins with a short introduction to prepositional logic and the concepts and properties of the STP and progressing via the (bi)linear expression of Boolean (control) networks to disturbance decoupling and decomposition of Boolean control systems. Finally multi-valued logic is considered as a more precise way of describing real networks and stochastic Boolean networks are touched upon. Relevant numerical calculations are explained in an appendix and a MATLAB® toolbox for the algorithms in the book can be downloaded from http://lsc.amss.ac.cn/~dcheng/.

Analysis and Control of Boolean Networks will be a fundamental reference for researchers in systems biology, control, systems science and physics. The book was developed for a short course for graduate students and is suitable for that purpose. Computer scientists and logicians may also find this book to be of interest.

“The aim of the book is to provide a new framework for the study of Boolean control networks. … The book is self-contained and contains many examples which illustrate the concepts and the proposed techniques. … the book represents a fundamental reference for researchers in systems biology, systems science and physics.” (Valeriu Prepeliţă, Zentralblatt MATH, Vol. 1209, 2011)
Buy options