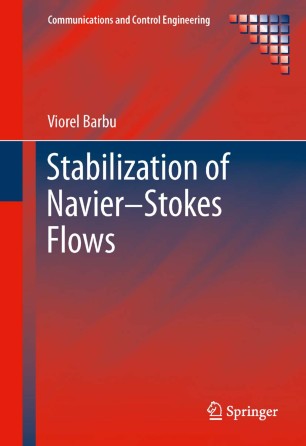 • What is the structure of the stabilizing feedback controller?

• How can it be designed using a minimal set of eigenfunctions of the Stokes–Oseen operator?

The analysis developed here provides a rigorous pattern for the design of efficient stabilizable feedback controllers to meet the needs of practical problems and the conceptual controllers actually detailed will render the reader’s task of application easier still. Stabilization of Navier–Stokes Flows avoids the tedious and technical details often present in mathematical treatments of control and Navier–Stokes equations and will appeal to a sizeable audience of researchers and graduate students interested in the mathematics of flow and turbulence control and in Navier-Stokes equations in particular. The chief points of linear functional analysis, linear algebra, probability theory and general variational theory of elliptic, parabolic and Navier–Stokes equations are reviewed in an introductory chapter and at the end of chapters 3 and 4.

Professor Barbu is a professor with the University Al.I.Cuza (Romania) and member of Romanian Academy. He had visiting professorship positions with several universities in the USA and Europe including the following: Purdue University, Cincinnati University, Virginia University, Ohio University, Bonn University, University of Bologna. He has published a dozen monographs and 170 research papers in the following fields: nonlinear PDEs, control theory of parameter distributed systems and of Navier–Stokes equations, Stochatic PDEs, integral equations.

“The book is well written and nice to read. Each chapter is followed by numerous references. Many of the results presented in the book come from papers by the author and co-authors. This book is an excellent introduction to the subject and is recommended to researchers wanting to learn about stabilization problems for parabolic equations.” (Jean-Pierre Raymond, Mathematical Reviews, March, 2015)
Buy options