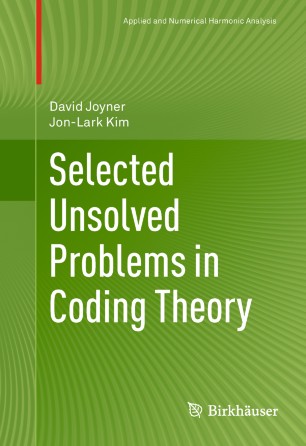 Using an original mode of presentation and emphasizing the computational nature of the subject, this book explores a number of the unsolved problems that continue to exist in coding theory. A well-established and still highly relevant branch of mathematics, the theory of error-correcting codes is concerned with reliably transmitting data over a ‘noisy’ channel. Despite its frequent use in a range of contexts—the first close-up pictures of the surface of Mars, taken by the NASA spacecraft Mariner 9, were transmitted back to Earth using a Reed–Muller code—the subject contains interesting problems that have to date resisted solution by some of the most prominent mathematicians of recent decades.

Employing SAGE—a free open-source mathematics software system—to illustrate their ideas, the authors begin by providing background on linear block codes and introducing some of the special families of codes explored in later chapters, such as quadratic residue and algebraic-geometric codes. Also surveyed is the theory that intersects self-dual codes, lattices, and invariant theory, which leads to an intriguing analogy between the Duursma zeta function and the zeta function attached to an algebraic curve over a finite field. The authors then examine a connection between the theory of block designs and the Assmus–Mattson theorem and scrutinize the knotty problem of finding a non-trivial estimate for the number of solutions over a finite field to a hyperelliptic polynomial equation of "small" degree, as well as the best asymptotic bounds for a binary linear block code. Finally, some of the more mysterious aspects relating modular forms and algebraic-geometric codes are discussed.

Selected Unsolved Problems in Coding Theory is intended for graduate students and researchers in algebraic coding theory, especially those who are interested in finding current unsolved problems. Familiarity with concepts in algebra, number theory, and modular forms is assumed. The work may be used as supplementary reading material in a graduate course on coding theory or for self-study.