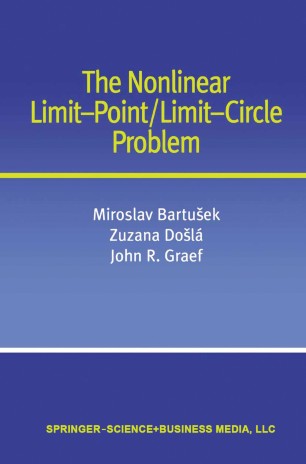 First posed by Hermann Weyl in 1910, the limit–point/limit–circle problem has inspired, over the last century, several new developments in the asymptotic analysis of nonlinear differential equations. This self-contained monograph traces the evolution of this problem from its inception to its modern-day extensions to the study of deficiency indices and analogous properties for nonlinear equations.

The book opens with a discussion of the problem in the linear case, as Weyl originally stated it, and then proceeds to a generalization for nonlinear higher-order equations. En route, the authors distill the classical theorems for second and higher-order linear equations, and carefully map the progression to nonlinear limit–point results. The relationship between the limit–point/limit–circle properties and the boundedness, oscillation, and convergence of solutions is explored, and in the final chapter, the connection between limit–point/limit–circle problems and spectral theory is examined in detail.

With over 120 references, many open problems, and illustrative examples, this work will be valuable to graduate students and researchers in differential equations, functional analysis, operator theory, and related fields.