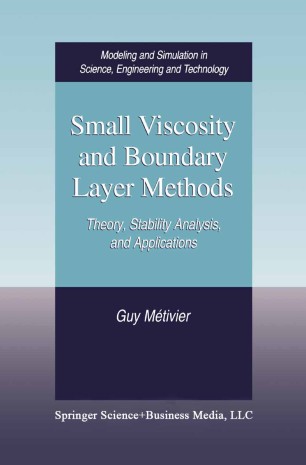 This book has evolved from lectures and graduate courses given in Brescia (Italy), Bordeaux and Toulouse (France};' It is intended to serve as an intro­ duction to the stability analysis of noncharacteristic multidimensional small viscosity boundary layers developed in (MZl]. We consider parabolic singular perturbations of hyperbolic systems L(u) - £P(u) = 0, where L is a nonlinear hyperbolic first order system and P a nonlinear spatially elliptic term. The parameter e measures the strength of the diffusive effects. With obvious reference to fluid mechanics, it is referred to as a "viscosity." The equation holds on a domain n and is supplemented by boundary conditions on an.The main goal of this book is to studythe behavior of solutions as etends to O. In the interior of the domain, the diffusive effects are negligible and the nondiffusive or inviscid equations (s = 0) are good approximations. However, the diffusive effects remain important in a small vicinity of the boundary where they induce rapid fluctuations of the solution, called layers. Boundary layers occur in many problems in physics and mechanics. They also occur in free boundary value problems, and in particular in the analysis of shock waves. Indeed, our study of noncharacteristic boundary layers is strongly motivated by the analysis of multidimensional shock waves. At the least, it is a necessary preliminary and important step. We also recall the importance of the viscous approach in the theoretical analysis ofconservation laws (see, e.g., [Lax], (Kru], (Bi-Br]).