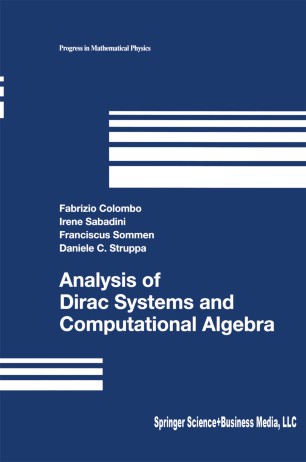 The subject of Clifford algebras has become an increasingly rich area of research with a significant number of important applications not only to mathematical physics but to numerical analysis, harmonic analysis, and computer science.

The main treatment is devoted to the analysis of systems of linear partial differential equations with constant coefficients, focusing attention on null solutions of Dirac systems. In addition to their usual significance in physics, such solutions are important mathematically as an extension of the function theory of several complex variables. The term "computational" in the title emphasizes two main features of the book, namely, the heuristic use of computers to discover results in some particular cases, and the application of Gröbner bases as a primary theoretical tool.

Knowledge from different fields of mathematics such as commutative algebra, Gröbner bases, sheaf theory, cohomology, topological vector spaces, and generalized functions (distributions and hyperfunctions) is required of the reader. However, all the necessary classical material is initially presented.

The book may be used by graduate students and researchers interested in (hyper)complex analysis, Clifford analysis, systems of partial differential equations with constant coefficients, and mathematical physics.