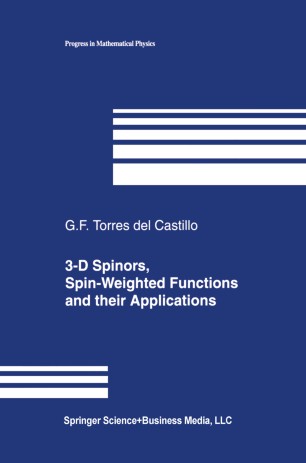 This systematic and self-contained treatment of the theory of three-dimensional spinors and their applications fills an important gap in the literature. Without using the customary Clifford algebras frequently studied in connection with the representations of orthogonal groups, spinors are developed in this work for three-dimensional spaces in a language analogous to the spinor formalism used in relativistic spacetime.

Unique features of this work:

* Three chapters devoted to the definition, properties and applications of spin-weighted functions, with all background given.

* Detailed treatment of spin-weighted spherical harmonics, properties and many applications, with examples from electrodynamics, quantum mechanics, and relativity

* Wide range of topics, including the algebraic classification of spinors, conformal rescalings, connections with torsion and Cartan's structural equations in spinor form, spin weight, spin-weighted operators and the geometrical meaning of the Ricci rotation coefficients

This work will serve graduate students and researchers in mathematics and mathematical and theoretical physics; it is suitable as a course or seminar text, as a reference text, and may also be used for self-study.

"In summary…the book gathers much of what can be done with 3-D spinors in an easy-to-read, self-contained form designed for applications that will supplement many available spinor treatments. The book…should be appealing to graduate students and researchers in relativity and mathematical physics."

"The presnet book provides an easy-to-read and unconventional presentation of the spinor formalism for three-dimensional spaces with a definite or indefinite metric...Following a nice and descriptive introduction chapters 2-4 are devoted to spin-weighted functions and their applications, while chapters 5 and 6 collect all the standard material on spinor algebra and spinor analysis respectively. The final chapter contains some applications of the formalism to general relativity." ---Monatshefte für Mathematik