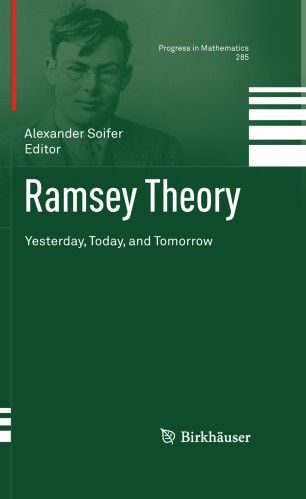 Part of the Progress in Mathematics book series (PM, volume 285)

Ramsey theory is a relatively “new,” approximately 100 year-old direction of fascinating mathematical thought that touches on many classic fields of mathematics such as combinatorics, number theory, geometry, ergodic theory, topology, combinatorial geometry, set theory, and measure theory. Ramsey theory possesses its own unifying ideas, and some of its results are among the most beautiful theorems of mathematics. The underlying theme of Ramsey theory can be formulated as: any finite coloring of a large enough system contains a monochromatic subsystem of higher degree of organization than the system itself, or as T.S. Motzkin famously put it, absolute disorder is impossible.

Ramsey Theory: Yesterday, Today, and Tomorrow explores the theory’s history, recent developments, and some promising future directions through invited surveys written by prominent researchers in the field. The first three surveys provide historical background on the subject; the last three address Euclidean Ramsey theory and related coloring problems. In addition, open problems posed throughout the volume and in the concluding open problem chapter will appeal to graduate students and mathematicians alike.

“As we learn from the preface, [Ramsey Theory: Yesterday, Today and Tomorrow] grew out of an intentionally non-traditional conference on Ramsey theory. In accordance with that, the book itself is far from being a traditional textbook or reference book on the subject…We learn far more about the history of Ramsey theory than from other sources…the promise of discussing the future is fulfilled by a very extensive list of open problems contributed by numerous participants. Sometimes it is not even clear what the best way of asking a certain question is, and we are shown the raw form of the problem, just as we would if we participated at a conference…the book is undoubtedly a lot of fun. As one expects from a book on Ramsey theory, it is full of problems that are very easy to formulate, but terribly hard to solve…[the book] could well be used for a course using a seminar format, or for self-study by a graduate student familiarizing himself with the subject.”      —MAA Reviews