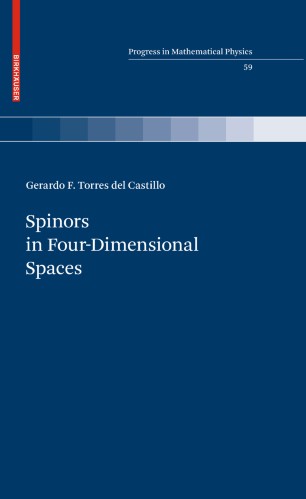 Without using the customary Clifford algebras frequently studied in connection with the representations of orthogonal groups, this book gives an elementary introduction to the two-component spinor formalism for four-dimensional spaces with any signature. Some of the useful applications of four-dimensional spinors, such as Yang–Mills theory, are derived in detail using illustrative examples.

Key topics and features:
• Uniform treatment of the spinor formalism for four-dimensional spaces of any signature, not only the usual signature (+ + + −) employed in relativity
• Examples taken from Riemannian geometry and special or general relativity are
discussed in detail, emphasizing the usefulness of the two-component spinor formalism
• Exercises in each chapter
• The relationship of Clifford algebras and Dirac four-component spinors is established
• Applications of the two-component formalism, focusing mainly on general relativity, are
presented in the context of actual computations

Spinors in Four-Dimensional Spaces is aimed at graduate students and researchers in mathematical and theoretical physics interested in the applications of the two-component spinor formalism in any four-dimensional vector space or Riemannian manifold with a definite or indefinite metric tensor. This systematic and self-contained book is suitable as a seminar text, a reference book, and a self-study guide.

Reviews from the author's previous book, 3-D Spinors, Spin-Weighted Functions and their Applications:

In summary…the book gathers much of what can be done with 3-D spinors in an easy-to-read, self-contained form designed for applications that will supplement many available spinor treatments. The book…should be appealing to graduate students and researchers in relativity and mathematical physics.
—Mathematical Reviews

The present book provides an easy-to-read and unconventional presentation of the spinor formalism for three-dimensional spaces with a definite or indefinite metric...Following a nice and descriptive introduction…the final chapter contains some applications of the formalism to general relativity.
—Monatshefte für Mathematik