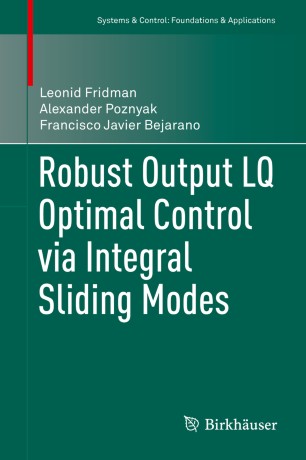 Featuring original research from well-known experts in the field of sliding mode control, this monograph presents new design schemes for implementing LQ control solutions in situations where the output system is the only information provided about the state of the plant. This new design works under the restrictions of matched disturbances without losing its desirable features. On the cutting-edge of optimal control research, Robust Output LQ Optimal Control via Integral Sliding Modes is an excellent resource for both graduate students and professionals involved in linear systems, optimal control, observation of systems with unknown inputs, and automatization.

In the theory of optimal control, the linear quadratic (LQ) optimal problem plays an important role due to its physical meaning, and its solution is easily given by an algebraic Riccati equation. This solution turns out to be restrictive, however, because of two assumptions: the system must be free from disturbances and the entire state vector must be known. A new technique, called  output integral sliding modes, eliminates the effects of disturbances acting in the same subspace as the control. By using LQ-optimal control together with integral sliding modes, the former is made robust and based on output information only. Thus optimal control theory improves its applicability.