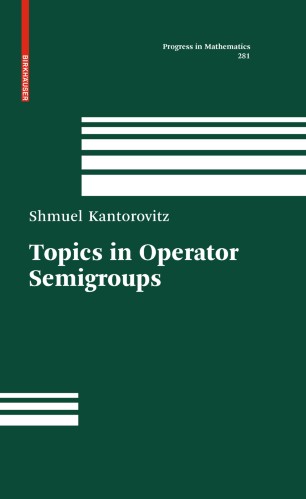 Part of the Progress in Mathematics book series (PM, volume 281)

The theory of operator semigroups was essentially discovered in the early 1930s.  Since then, the theory has developed into a rich and exciting area of functional analysis and has been applied to various mathematical topics such as Markov processes, the abstract Cauchy problem, evolution equations, and mathematical physics.

This self-contained monograph focuses primarily on the theoretical connection between the theory of operator semigroups and spectral theory. Divided into three parts with a total of twelve distinct chapters, this book gives an in-depth account of the subject with numerous examples, detailed proofs, and a brief look at a few applications.

* The Hille–Phillips perturbation theorem, and Stone’s representation of unitary semigroups

With a collection of miscellaneous exercises at the end of the book and an introductory chapter examining the basic theory involved, this monograph is suitable for second-year graduate students interested in operator semigroups.

“This monograph is suitable for second-year graduate students, but it can be recommended also to any researcher interested in operator semigroups.” (László Kérchy, Acta Scientiarum Mathematicarum (Szeged), Vol. 78 (1-2), 2012)

“The present graduate level text expands the previous lecture notes from the same author, Semigroups of operators and spectral theory … . It begins with a succinct introduction to operator semigroups covering classical topics such as generators, the Hille-Yosida theorem, dissipative operators and the Lumer–Phillips theorem, the Trotter convergence theorem, exponential formulas, perturbation theory, Stone’s theorem, and analytic semigroups. … The text is also intended for second-year graduate students … . it will be a valuable source for researchers working in this area.” (G. Teschl, Monatshefte für Mathematik, Vol. 162 (4), April, 2011)

“This book is based on the author’s lecture notes … in which the more advanced parts concentrated on spectral representations. … There is also a presentation of a well-known stability theorem for semigroups under countable spectral conditions. … The increased variety of topics covered will make the book more useful … . Other advantages are the inclusion of an index and some exercises, considerable extensions of the bibliography and the list of contents, and more attractive typesetting.”­­­ (C. J. K. Batty, Mathematical Reviews, Issue 2010 k)