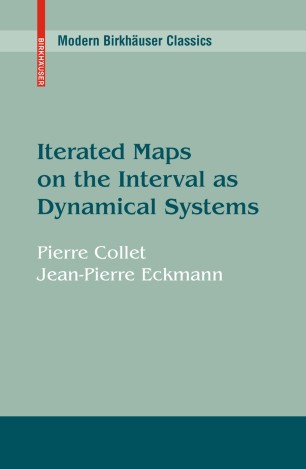 Iterated Maps on the Interval as Dynamical Systems

Iterations of continuous maps of an interval to itself serve as the simplest examples of models for dynamical systems. These models present an interesting mathematical structure going far beyond the simple equilibrium solutions one might expect. If, in addition, the dynamical system depends on an experimentally controllable parameter, there is a corresponding mathematical structure revealing a great deal about interrelations between the behavior for different parameter values.

This work explains some of the early results of this theory to mathematicians and theoretical physicists, with the additional hope of stimulating experimentalists to look for more of these general phenomena of beautiful regularity, which oftentimes seem to appear near the much less understood chaotic systems. Although continuous maps of an interval to itself seem to have been first introduced to model biological systems, they can be found as models in most natural sciences as well as economics.

Iterated Maps on the Interval as Dynamical Systems is a classic reference used widely by researchers and graduate students in mathematics and physics, opening up some new perspectives on the study of dynamical systems .

This book is a thorough and readable introduction to some aspects of the theory of one-dimensional dynamical systems…The kneading calculus of Milnor—Thurston receives its most accessible treatment to date in print…This is an important and beautiful exposition, both as an orientation for the reader unfamiliar with this theory and as a prelude to studying in greater depth some of the hard papers on the subject.

This book provides a good survey of recent developments in the study of the dynamics of smooth self-maps on the interval. It…deals with a subject whose literature often appears in physics journals. This literature suffers in general from a failure to distinguish between mathematical theorems and ‘facts’ determined empirically, usually by computer experiment. It is a difficult task to consider both of these types of information and carefully maintain the distinction (an absolute necessity from the point of view of a mathematician). The work under review seems to do a good job of this…On the whole this work is a good one meeting a need to survey recent results in this active and important area of mathematics.