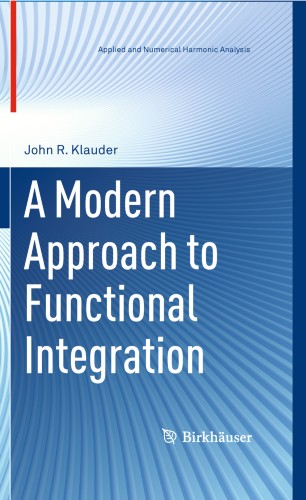 A Modern Approach to Functional Integration

This text takes advantage of recent developments in the theory of path integration to provide an improved treatment of quantization of systems that either have no constraints or instead involve constraints with demonstratively improved procedures. Strong emphasis is placed on the coherent state form of the path integral, which typically is only briefly mentioned in the textbook literature. Also of prime importance, a key focus of the book will be on the projection operator method of enforcing quantum constraints. Additionally, several novel proposals are introduced to deal with highly singular quantum field theories.

The modern treatment used by the author is an attempt to make a major paradigm shift in how the art of functional integration is practiced. The techniques developed in the work will prove valuable to graduate students and researchers in physics, chemistry, mathematical physics, and applied mathematics who find it necessary to deal with solutions to wave equations, both quantum and beyond.

* A thorough grounding in the Gold Standard of path integrals: the Wiener measure

* Formulation of all path integral construction from abstract principles

* A review of coherent state fundamentals

* A construction of the Wiener-measure regularized phase space path integral, its emergence as a coherent state path integral, and its superior definition and connection to the classical theory underlying the quantization

* Introduction of the projection operator method to deal with quantum constraints, its many virtues as compared to traditional methods, and how it can be incorporated into a conventional or coherent state phase space path integral

A Modern Approach to Functional Integration offers insight into these contemporary research topics, which may lead to improved methods and results that cannot be found elsewhere in the textbook literature. Exercises are included in most chapters, making the book suitable for a one-semester graduate course on functional integration; prerequisites consist mostly of some basic knowledge of quantum mechanics.