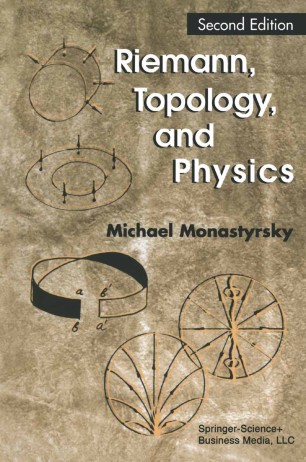 This significantly expanded second edition of Riemann, Topology, and Physics combines a fascinating account of the life and work of Bernhard Riemann with a lucid discussion of current interaction between topology and physics. The author, a distinguished mathematical physicist, takes into account his own research at the Riemann archives of Göttingen University and developments over the last decade that connect Riemann with numerous significant ideas and methods reflected throughout contemporary mathematics and physics.

Special attention is paid in part one to results on the Riemann–Hilbert problem and, in part two, to discoveries in field theory and condensed matter such as the quantum Hall effect, quasicrystals, membranes with nontrivial topology, "fake" differential structures on 4-dimensional Euclidean space, new invariants of knots and more. In his relatively short lifetime, this great mathematician made outstanding contributions to nearly all branches of mathematics; today Riemann’s name appears prominently throughout the literature.

"The book is highly recommendable—for students and scientific workers—not only for the valuable information in it, but also for its spirit: history and higher mathematics are not dry here; they become alive and motivate further studies."—ZAA

"This is a new translation of a book first published in English in 1987... Translated from Russian...it consists of two separate but related works. The first is an account of the life and work of Riemann, the second an account of several different topics in physics which are illuminated by the introduction of topological ideas. The discussion of Riemann is even better in the new edition. The mathematical account is richer and various errors have been corrected... The second half has been revised in a similar fashion... It has also been enriched by a new chapter which starts with von Neumann algebras and the work of Vaughn Jones... The book does three things very well: it reminds us of the range and depth of Riemann’s interests, which are emblematic of what the author values in mathematical physics; describes some of the many successes of Russian mathematicians and physicists; and it provides a lucid account of some modern work in which topology is genuinely applied. Books like this are vital for the health of mathematics and it is to be hoped that more will be written."---Mathematical Reviews