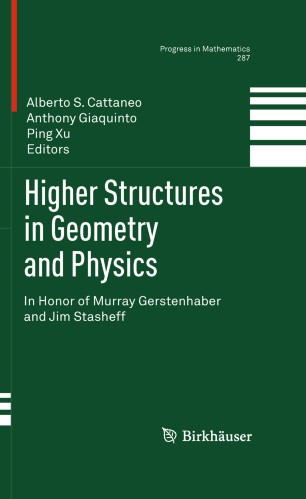 Higher Structures in Geometry and Physics

In Honor of Murray Gerstenhaber and Jim Stasheff

Part of the Progress in Mathematics book series (PM, volume 287)

This book is centered around higher algebraic structures stemming from the work of Murray Gerstenhaber and Jim Stasheff that are now ubiquitous in various areas of mathematics— such as algebra, algebraic topology, differential geometry, algebraic geometry, mathematical physics— and in theoretical physics such as quantum field theory and string theory. These higher algebraic structures provide a common language essential in the study of deformation quantization, theory of algebroids and groupoids, symplectic field theory, and much more. The ideas of higher homotopies and algebraic deformation have a growing number of theoretical applications and have played a prominent role in recent mathematical advances. For example, algebraic versions of higher homotopies have led eventually to the proof of the formality conjecture and the deformation quantization of Poisson manifolds. As observed in deformations and deformation philosophy, a basic observation is that higher homotopy structures behave much better than strict structures.

Each contribution in this volume expands on the ideas of Gerstenhaber and Stasheff. Higher Structures in Geometry and Physics is intended for post-graduate students, mathematical and theoretical physicists, and mathematicians interested in higher structures.