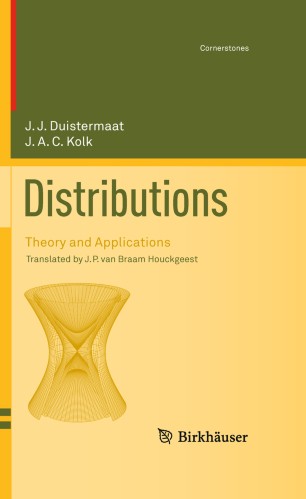 This textbook is an application-oriented introduction to the theory of distributions, a powerful tool used in mathematical analysis. The treatment emphasizes applications that relate distributions to linear partial differential equations and Fourier analysis problems found in mechanics, optics, quantum mechanics, quantum field theory, and signal analysis. Throughout the book, methods are developed to deal with formal calculations involving functions, series, and integrals that cannot be mathematically justified within the classical framework.

• Many examples, exercises, hints, and solutions guide the reader throughout the text.

• Includes an introduction to distributions, differentiation, convergence, convolution, the Fourier transform, and spaces of distributions having special properties.

• Original proofs, which may be difficult to locate elsewhere, are given for many well-known results.

• The Fourier transform is transparently treated and applied to provide a new proof of the Kernel Theorem, which in turn is used to efficiently derive numerous important results.

• The systematic use of pullback and pushforward introduces concise notation.

• Emphasizes the role of symmetry in obtaining short arguments and investigates distributions that are invariant under the actions of various groups of transformations.

Distributions: Theory and Applications is aimed at advanced undergraduates and graduate students in mathematics, theoretical physics, and engineering, who will find this textbook a welcome introduction to the subject, requiring only a minimal mathematical background. The work may also serve as an excellent self-study guide for researchers who use distributions in various fields.

Duistermaat was affiliated with the Mathematical Institute of Utrecht University since 1974 as a Professor of Pure and Applied Mathematics. During the last five years he was honored with a special professorship at Utrecht University endowed by the Royal Netherlands Academy of Arts and Sciences. He was also a member of the Academy since 1982. He had 23 PhD students.

Johan Kolk has published in the areas of harmonic analysis on semisimple Lie groups, the theory of distributions, and classical analysis. Jointly with Duistermaat, he has written four books: besides the present one, one on Lie groups, and another on multidimensional real analysis. Until his retirement in 2009, he was affiliated with the Mathematical Institute of Utrecht University. For more information, see http://www.staff.science.uu.nl/~kolk0101/

“This is a fantastic book…Even in this enlightened age, the theory of distributions is a highly misunderstood and undervalued business…All of this notwithstanding, learning it from the extant standard sources has always been a rather an austere affair…Distributions: Theory and Applications is laden with examples and exercises…[The book] comes equipped with a long section containing solutions to selected exercises. Distributions: Theory and Applications is much more than a textbook for a one-semester introduction to the indicated subject: the reader/student who hangs in, reads the text while filling the margins and a notebook or two (or three, or four) along the way, and wrestles with the exercises, will be more than ready for more advanced works in the area as well as the business of applying distributions in a number of nontrivial settings. Additionally he will have been exposed to a great deal of serious mathematics from, if you’ll pardon the pun, all over the spectrum.”

“[Distributions: Theory and Applications] is a very useful, well-written, self contained, motivating book presenting the essentials of the theory of distributions of Schwartz, together with many applications to different areas of mathematics, like linear partial differential equations, Fourier analysis, quantum mechanics and signal analysis…One of the main features of this book is that many clarifying examples, presented with full detail, are included in the text. Moreover, a large number of problems is included at the end of each chapter…This reviewer found the book under review very stimulating, informative and inviting to further study. It is a very useful text for students who want to learn the theory of distributions, for experts in the abstract theory who want to read an application-oriented presentation with many examples and, last but not least, for mathematicians in related areas or theoretical physicists who need a self-contained, reasonable short presentation of the theory. I would strongly recommend it to all my colleagues.”     —Zentralblatt MATH

“The aim of this book is to present the theory of distributions of Laurent Schwartz in a rigorous, accessible way, together with applications to linear partial differential equations, Fourier analysis, quantum mechanics and signal analysis. The text of Duistermaat and Kolk emphasizes applications to natural sciences like optics, quantum field theory, signal reconstruction or computer tomography. The exposition stresses applications and interactions with other parts of mathematics...It is a useful text for students who want to learn the theory of distributions, for experts in the abstract theory who want to read an application-oriented presentation with many examples, and also for mathematicians in related areas or theoretical physicists who need a self-contained presentation of the theory. The book includes many clarifying examples, presented in full detail. Many exercises and problems, with different levels of difficulty, are included at the end of each chapter. A reader who tries to solve them will re-examine many aspects of analysis of several variables in the light of the theory of distributions. Complete solutions of 146 of the 281 problems are provided and hints are given for many others.

In summary, this is a useful, well-written, self-contained book about the theory of distributions of Schwartz and applications to different areas of mathematics and physics. Although there are many good books that present an introduction to the theory of distributions of Schwartz, assuming different levels of knowledge of linear functional analysis, the text of Duistermaat and Kolk is a very welcome addition. In the opinion of this reviewer, this is a stimulating, informative book that invites further study, and I strongly recommend it to any readers interested in this topic.”     —Mathematical Reviews

“This is a wonderful graduate level book providing a modern introduction to distribution theory with several entrance points for deeper tours into advanced analysis and applications. The lucid discussions of the development of certain key notions and the fine careful proofs define it as a valuable text book for a corresponding university course. … even in independent self-study the reader has a fair chance to obtain a reasonable amount of working knowledge … .” (G. Hörmann, Monatshefte für Mathematik, Vol. 163 (1), May, 2011)