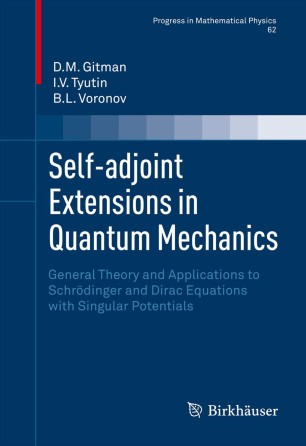 Quantization of physical systems requires a correct definition of quantum-mechanical observables, such as the Hamiltonian, momentum, etc., as self-adjoint operators in appropriate Hilbert spaces and their spectral analysis.  Though a “naïve”  treatment exists for dealing with such problems, it is based on finite-dimensional algebra or even infinite-dimensional algebra with bounded operators, resulting in paradoxes and inaccuracies.   A proper treatment of these problems requires invoking certain nontrivial notions and theorems from functional analysis concerning the theory of unbounded self-adjoint operators and the theory of self-adjoint extensions of symmetric operators.

Self-adjoint Extensions in Quantum Mechanics begins by considering quantization problems in general, emphasizing the nontriviality of consistent operator construction by presenting paradoxes of the naïve treatment.  The necessary mathematical background is then built by developing the theory of self-adjoint extensions.  Through examination of  various quantum-mechanical systems, the authors show how quantization problems associated with the correct definition of observables and their spectral analysis can be treated consistently for comparatively simple quantum-mechanical systems.  Systems that are examined include free particles on an interval, particles in a number of potential fields including delta-like potentials, the one-dimensional Calogero problem, the Aharonov–Bohm problem, and the relativistic Coulomb problem.

This well-organized text is most suitable for graduate students and postgraduates interested in deepening their understanding of mathematical problems in quantum mechanics beyond the scope of those treated in standard textbooks.  The book may also serve as a useful resource for mathematicians and researchers in mathematical and theoretical physics.

“In an infinite-dimensional Hilbert space a symmetric, unbounded operator is not necessarily self-adjoint. … The monograph by Gitman, Tyutin and Voronov is devoted to this problem. Its aim is to provide students and researchers in mathematical and theoretical physics with mathematical background on the theory of self-adjoint operators.” (Rupert L. Frank, Mathematical Reviews, February, 2013)
Buy options