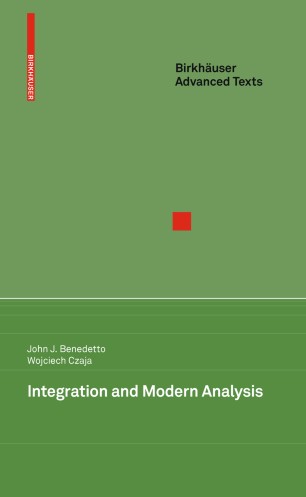 A paean to twentieth century analysis, this modern text has several important themes and key features which set it apart from others on the subject. A major thread throughout is the unifying influence of the concept of absolute continuity on differentiation and integration. This leads to fundamental results such as the Dieudonné–Grothendieck theorem and other intricate developments dealing with weak convergence of measures.

* Hundreds of problems from routine to challenging;

* Comprehensive treatment of connection between differentiation and integration, as well as complete proofs of state-of-the-art results;

* Classical real variables and introduction to the role of Cantor sets, later placed in the modern setting of self-similarity and fractals;

* Evolution of the Riesz representation theorem to Radon measures and distribution theory;

* The relation between surface measure and Hausforff measure;

* Complete presentation of Besicovich coverings and differentiation of measures.

Integration and Modern Analysis will serve advanced undergraduates and graduate students, as well as professional mathematicians. It may be used in the classroom or self-study.

“This is one of the best graduate texts on real variables, measure theory and integration theory known to the reviewer. ... The book is exceptionally accurate in up-to-date contents, structure of the text, comprehensibility and references (which is an excellent source for professionals). ... In addition to the numerous illustrative examples and applications, [Integration and Modern Analysis] is replete with interesting remarks and historical notes contained either in the body of the text or in the ‘Potpurri and titillation’ section at the end of each chapter. ... A subject Index, Index of Names, Index of Notation and a carefully prepared preface accompany this volume, being a useful guide to any reader. For teachers and for researchers, the book will prove a priceless resource, an avenue to new and often surprising ideas. Physically beautiful and elegantly printed, organized and written lucidly, this volume is a welcome addition and an important contribution to mathematical literature.” —Mathematical Reviews (Grigore Ciurea, Romania)

“Graduate analysis books are as common as tea served at department colloquia! Therefore, Integration and Modern Analysis by Benedetto and Czaja had better have something special to distinguish itself…Integration and Modern Analysis is not just your average cup of tea. Its goals go well beyond the usual prosaic objective of presenting rookie graduate students with a certain standard set of tools and skills in real analysis; Benedetto and Czaja aim to persuade the reader to their particular point of view and, indeed, to enlist him in their enterprise…Well, Benedetto and Czaja have a wonderful product to sell and are right in doing such enthusiastic preaching of their cause. Additionally, the exposition is solid, the book is loaded with exercises, and is dripping with the authors’ expertise. If you incline in this direction of analysis, Integration and Modern Analysis is unquestionably your cup of tea.” —MAA Reviews (Michael Berg, Loyola Marymount University, Los Angeles, CA)

“For the authors, the notion of 'absolute continuity', tracing back to Vitali, is basic for the whole theory as the unifying concept for all major results, such as the fundamental theorem of calculus, the Lebesgue dominated convergence theorem, and the Radon–Nikodým theorem. They find, that as yet in no textbook this point of view was carried through in an adequate way. Their text is intended as a remedy to the latter. As a consequence they include very carefully materials which are often omitted in monographs about real analysis and integration theory, such as Vitali's necessary and sufficient conditions for interchanging limits and integrals, the Vitali–Hahn–Saks theorem, but also, quite unusually, Grothendieck's theory of weak convergence of measures. The presentation of the material becomes most vivid by numerous remarks concerning the historical genesis, by biographical notes on the most important contributors, especially about Vitali, by discussion of problems, and by an excellent choice of examples and comments for motivation to an extent, that seem to be unique...All chapters end with sections (‘potpourri and titillations’) devoted to relations with other fields and problems intended for presenting new perspectives. This way a lot of information is provided and this makes the book interesting also for advanced study and for anybody interested in the field.” —Zentralblatt MATH (Werner Strauß, Universität Stuttgart)

“The aim of the present book is to emphasize how modern integration theory evolved from some classical problems in function theory, related mainly to Fourier analysis. … a nice book, containing a lot of results in measure theory and integration theory, making good connections between classical and modern ones. The lively style of exposition makes the reading both instructive and agreeable. It can be recommended … to students for self-study and to researchers in various domains of analysis as a reference text.” (S. Cobzaş, Studia Universitatis Babes-Bolyai, Mathematica, Vol. LV (4), December, 2010)