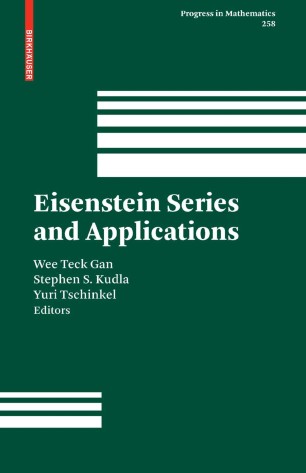 Part of the Progress in Mathematics book series (PM, volume 258)

Eisenstein series are an essential ingredient in the spectral theory of automorphic forms and an important tool in the theory of L-functions. They have also been exploited extensively by number theorists for many arithmetic purposes. Bringing together contributions from areas that are not usually interacting with each other, this volume introduces diverse users of Eisenstein series to a variety of important applications. With this juxtaposition of perspectives, the reader obtains deeper insights into the arithmetic of Eisenstein series.

The exposition focuses on the common structural properties of Eisenstein series occurring in many related applications that have arisen in several recent developments in arithmetic: Arakelov intersection theory on Shimura varieties, special values of L-functions and Iwasawa theory, and equidistribution of rational/integer points on homogeneous varieties. Key questions that are considered include: Is it possible to identify a class of Eisenstein series whose Fourier coefficients (resp. special values) encode significant arithmetic information? Do such series fit into p-adic families? Are the Eisenstein series that arise in counting problems of this type?