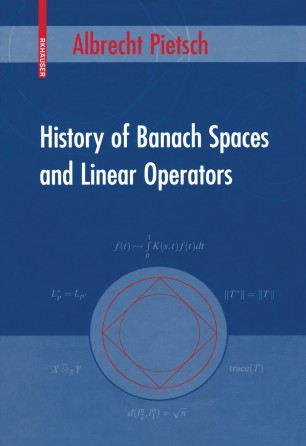 Named for Banach, one of the great mathematicians of the twentieth century, the concept of Banach spaces figures prominently in the study of functional analysis with applications to integral and differential equations, approximation theory, harmonic analysis, convex geometry, numerical mathematics, analytic complexity, and probability theory.

Written by a distinguished specialist in functional analysis, this book presents a comprehensive treatment of the history of Banach spaces and (abstract bounded) linear operators. While other historical texts on the subject focus on developments before 1950, this one is mainly devoted to the second half of the 20th century.

Banach space theory is presented in a broad mathematical context, using tools from such areas as set theory, topology, algebra, combinatorics, probability theory, and logic. Equal emphasis is given to both spaces and operators. Numerous examples and counterexamples elucidate the scope of the underlying concepts. As a stimulus for further research, the text also contains many problems which have not been previously solved.

The book may serve as a reference for researchers and as an introduction for graduate students who want to learn Banach space theory with some historical flavor. Helpful information is also provided for professors preparing their own lectures on functional analysis.

"This fundamental and interesting monograph is devoted to the history (and not only) of a remarkable and rich branch of up-to-date mathematics...

I recommend this book to all who are interested in Functional Analysis, to beginners and researchers, all students and all professors who deal with Functional Analysis and its applications. And I think that this book will be useful to each mathematical library."—Zantralblatt Math

"Pietsch’s treatment of the early stages of Banach space theory and related areas is very nice and interesting. It contains much information I was not aware of before reading this book. … it can give the novice to the subject a good overview of what Banach space theory is about. … The book is written in a friendly style and is very readable. … I recommend this book to anyone interested in functional analysis … and even to the general mathematical community." (Joram Lindenstrauss, Mathematical Reviews, Issue 2008 i)

“There is a relatively large amount of works devoted to the prehistory of functional analysis and its birth in the classical Banach period, but this monograph is exceptional in its focus on the whole 20th century. … the author … has successfully brought together a respectable amount of material concerning Banach spaces and linear operators. … The book will be certainly useful not only to researchers, but also to students. … I can warmly recommend this book ‘to all who love Banach spaces.’” (Antonín Slavík, Mathematica Bohemica, Issue 2, 2010)