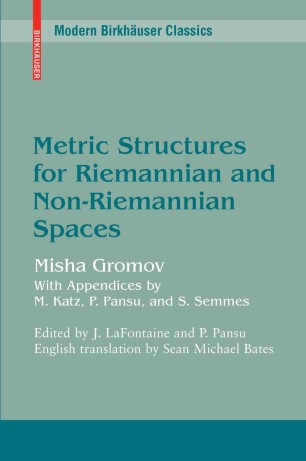 Metric theory has undergone a dramatic phase transition in the last decades when its focus moved from the foundations of real analysis to Riemannian geometry and algebraic topology, to the theory of infinite groups and probability theory.

The new wave began with seminal papers by Svarc and Milnor on the growth of groups and the spectacular proof of the rigidity of lattices by Mostow. This progress was followed by the creation of the asymptotic metric theory of infinite groups by Gromov.

The structural metric approach to the Riemannian category, tracing back to Cheeger's thesis, pivots around the notion of the Gromov–Hausdorff distance between Riemannian manifolds. This distance organizes Riemannian manifolds of all possible topological types into a single connected moduli space, where convergence allows the collapse of dimension with unexpectedly rich geometry, as revealed in the work of Cheeger, Fukaya, Gromov and Perelman. Also, Gromov found metric structure within homotopy theory and thus introduced new invariants controlling combinatorial complexity of maps and spaces, such as the simplicial volume, which is responsible for degrees of maps between manifolds. During the same period, Banach spaces and probability theory underwent a geometric metamorphosis, stimulated by the Levy–Milman concentration phenomenon, encompassing the law of large numbers for metric spaces with measures and dimensions going to infinity.

The first stages of the new developments were presented in Gromov's course in Paris, which turned into the famous "Green Book" by Lafontaine and Pansu (1979). The present English translation of that work has been enriched and expanded with new material to reflect recent progress. Additionally, four appendices—by Gromov on Levy's inequality, by Pansu on "quasiconvex" domains, by Katz on systoles of Riemannian manifolds, and by Semmes overviewing analysis on metric spaces with measures—as well as an extensive bibliography and index round out this unique and beautiful book.

"The book gives genius insight into the connections between topology and Riemannian geometry, geometry and probability, geometry and analysis, respectively. The huge variety of progressive key ideas could provide numerous research problems in the next decades."   —Publicationes Mathematicae

"This book will become one of the standard references in the research literature on the subject. Many fascinating open problems are pointed out. Since this domain has dramatically exploded since 1979 and also is one which has many contact points with diverse areas of mathematics, it is no small task to present a treatment which is at once broad and coherent. It is a major accomplishment of Misha Gromov to have written this exposition. It is hard work to go through the book, but it is worth the effort."   —Zentralblatt Math

"The first edition of this book...is considered one of the most influential books in geometry in the last twenty years... Among the most substantial additions [of the 2/e]...is a chapter on convergence of metric spaces with measures, and an appendix on analysis on metric spaces... In addition, numerous remarks, examples, proofs, and open problems are inserted throughout the book. The original text is preserved with new items conveniently indicated... This book is certain to be a source of inspiration for many researchers as well as required reading for students entering the subject."   —Mathematical Reviews

“This is a reprint of the 2001 edition of Gromov’s by now classical book on metric structures. … this work will continue to set the standard in the field for the foreseeable future.” (M. Kunzinger, Monatshefte für Mathematik, Vol. 156 (4), April, 2009)