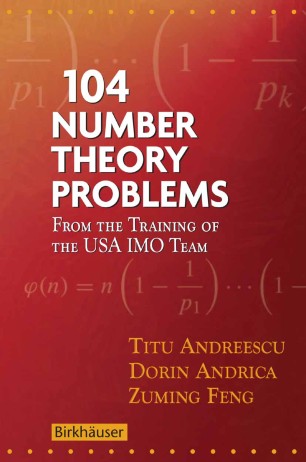 From the Training of the USA IMO Team

This challenging problem book by renowned US Olympiad coaches, mathematics teachers, and researchers develops a multitude of problem-solving skills needed to excel in mathematical contests and research in number theory. Offering inspiration and intellectual delight, the problems throughout the book encourage students to express their ideas, conjectures, and conclusions in writing. Applying specific techniques and strategies, readers will acquire a solid understanding of the fundamental concepts and ideas of number theory.

* Builds a bridge between ordinary high school examples and exercises in number theory and more sophisticated, intricate and abstract concepts and problems

* Begins by familiarizing students with typical examples that illustrate central themes, followed by numerous carefully selected problems and extensive discussions of their solutions

* Combines unconventional and essay-type examples, exercises and problems, many presented in an original fashion

104 Number Theory Problems is a valuable resource for advanced high school students, undergraduates, instructors, and mathematics coaches preparing to participate in mathematical contests and those contemplating future research in number theory and its related areas.

Titu Andreescu received his Ph.D. from the West University of Timisoara, Romania. The topic of his dissertation was "Research on Diophantine Analysis and Applications." Professor Andreescu currently teaches at The University of Texas at Dallas. He is past chairman of the USA Mathematical Olympiad, served as director of the MAA American Mathematics Competitions (1998–2003), coach of the USA International Mathematical Olympiad Team (IMO) for 10 years (1993–2002), director of the Mathematical Olympiad Summer Program (1995–2002), and leader of the USA IMO Team (1995–2002). In 2002 Titu was elected member of the IMO Advisory Board, the governing body of the world's most prestigious mathematics competition. Titu co-founded in 2006 and continues as director of the AwesomeMath Summer Program (AMSP). He received the Edyth May Sliffe Award for Distinguished High School Mathematics Teaching from the MAA in 1994 and a "Certificate of Appreciation" from the president of the MAA in 1995 for his outstanding service as coach of the Mathematical Olympiad Summer Program in preparing the US team for its perfect performance in Hong Kong at the 1994 IMO. Titu’s contributions to numerous textbooks and problem books are recognized worldwide.

Dorin Andrica received his Ph.D. in 1992 from "Babes-Bolyai” University in Cluj-Napoca, Romania; his thesis treated critical points and applications to the geometry of differentiable submanifolds. Professor Andrica has been chairman of the Department of Geometry at "Babes-Bolyai" since 1995. He has written and contributed to numerous mathematics textbooks, problem books, articles and scientific papers at various levels. He is an invited lecturer at university conferences around the world: Austria, Bulgaria, Czech Republic, Egypt, France, Germany, Greece, Italy, the Netherlands, Portugal, Serbia, Turkey, and the USA. Dorin is a member of the Romanian Committee for the Mathematics Olympiad and is a member on the editorial boards of several international journals. Also, he is well known for his conjecture about consecutive primes called "Andrica's Conjecture." He has been a regular faculty member at the Canada–USA Mathcamps between 2001–2005 and at the AwesomeMath Summer Program (AMSP) since 2006.

"In short, this book is a very valuable tool for any student/coach interested in preparing for mathematics competitions, especially the International Mathematical Olympiad.  College students participating in the Putnam competition might also find quite a few interesting problems. Moreover, any course in number theory could be supplemented with this book and could use some of the references included. Even research mathematicians working in number theory will find this book of value in their pursuits." -MAA Online

"The names of the authors sound familiar for teachers of mathematics and mathematicians who use books of these types … . I am sure about the success of this book. It is going to be a ‘bestseller’. It can be useful for high school students preparing for contests, and for teachers helping them all over the world. I am also reliant on being able to insert some excellent problems of the book into the syllabus of number theory courses at university level." (József Kosztolányi, Acta Scientiarum Mathematicarum, Vol. 73, 2007)

“The book starts with a gentle introduction to number theory. It serves for a training of the participants of the U. S. International Mathematical Olympiad. … The 104 problems are carefully selected. … The solutions are also carefully presented.” (J. Schoissengeier, Monatshefte für Mathematik, Vol. 156 (3), March, 2009)