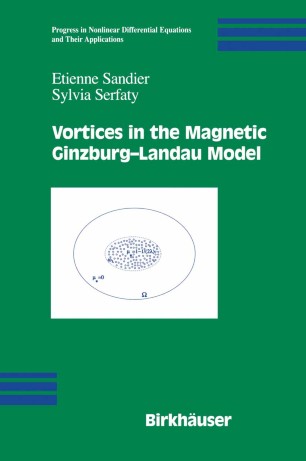 Vortices in the Magnetic Ginzburg-Landau Model

Part of the Progress in Nonlinear Differential Equations and Their Applications book series (PNLDE, volume 70)

With the discovery of type-II superconductivity by Abrikosov, the prediction of vortex lattices, and their experimental observation, quantized vortices have become a central object of study in superconductivity, superfluidity, and Bose--Einstein condensation. This book presents the mathematics of superconducting vortices in the framework of the acclaimed two-dimensional Ginzburg-Landau model, with or without magnetic field, and in the limit of a large Ginzburg-Landau parameter, kappa.

This text presents complete and mathematically rigorous versions of both results either already known by physicists or applied mathematicians, or entirely new. It begins by introducing mathematical tools such as the vortex balls construction and Jacobian estimates. Among the applications presented are: the determination of the vortex densities and vortex locations for energy minimizers in a wide range of regimes of applied fields, the precise expansion of the so-called first critical field in a bounded domain, the existence of branches of solutions with given numbers of vortices, and the derivation of a criticality condition for vortex densities of non-minimizing solutions. Thus, this book retraces in an almost entirely self-contained way many results that are scattered in series of articles, while containing a number of previously unpublished results as well.

The book also provides a list of open problems and a guide to the increasingly diverse mathematical literature on Ginzburg--Landau related topics. It will benefit both pure and applied mathematicians, physicists, and graduate students having either an introductory or an advanced knowledge of the subject.