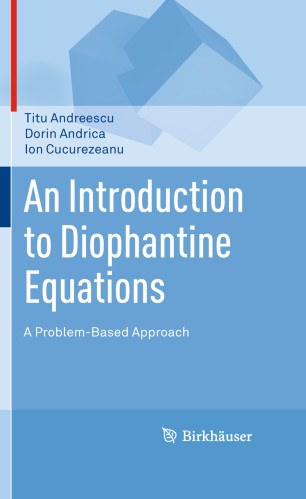 An Introduction to Diophantine Equations

An Introduction to Diophantine Equations: A Problem-Based Approach is intended for undergraduates, advanced high school students and teachers, mathematical contest participants — including Olympiad and Putnam competitors — as well as readers interested in essential mathematics. The work uniquely presents unconventional and non-routine examples, ideas, and techniques.

“This book is devoted to problems from mathematical competitions involving diophantine equations. … Each chapter contains a large number of solved examples and presents the reader with problems whose solutions can be found in the book’s second part. This volume will be particularly interesting for participants in mathematical contests and their coaches. It will also give a lot of pleasure to everyone who likes to tackle elementary, yet nontrivial problems concerning diophantine equations.” (Ch. Baxa, Monatshefte für Mathematik, Vol. 167 (3-4), September, 2012)

“Diophantus’ Arithmetica is a collection of problems each followed by a solution...The book at hand is intended for high school students, undergraduates and math teachers. It is written in a language that everyone in these groups will be familiar with. The exposition is very lucid and the proofs are clear and instructive. The book will be an invaluable source for math contest participants and other math fans. It will be an excellent addition to any math library.” (Alex Bogomolny, The Mathematical Association of America, October, 2010)

“Diophantine analysis, the business of solving equations with integers, constitutes a subdiscipline within the larger field of number theory. One problem in this subject, Fermat's last theorem, till solved, topped most lists of the world's most celebrated unsolved mathematics problems, so the subject attracted much attention from mathematicians and even the larger public. Nevertheless, sophisticated 20th-century tools invented to attack Diophantine equations (algebraic number fields, automorphic forms, L-functions, adelic groups, etc.) have emerged as proper objects of study in their own right. So for a popular subject, modern lower-level works focused on the individual Diophantine equation (and not on big machines aimed generally at classes of such equations) are relatively rare. The present volume…fills this need...Summing Up: Recommended. Lower- and upper-division undergraduates and general readers.” (D.V. Feldman, Choice, July, 2010)