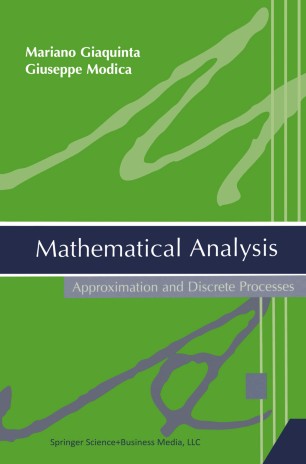 This volume! aims at introducing some basic ideas for studying approxima­ tion processes and, more generally, discrete processes. The study of discrete processes, which has grown together with the study of infinitesimal calcu­ lus, has become more and more relevant with the use of computers. The volume is suitably divided in two parts. In the first part we illustrate the numerical systems of reals, of integers as a subset of the reals, and of complex numbers. In this context we intro­ duce, in Chapter 2, the notion of sequence which invites also a rethinking of the notions of limit and continuity2 in terms of discrete processes; then, in Chapter 3, we discuss some elements of combinatorial calculus and the mathematical notion of infinity. In Chapter 4 we introduce complex num­ bers and illustrate some of their applications to elementary geometry; in Chapter 5 we prove the fundamental theorem of algebra and present some of the elementary properties of polynomials and rational functions, and of finite sums of harmonic motions. In the second part we deal with discrete processes, first with the process of infinite summation, in the numerical case, i.e., in the case of numerical series in Chapter 6, and in the case of power series in Chapter 7. The last chapter provides an introduction to discrete dynamical systems; it should be regarded as an invitation to further study.