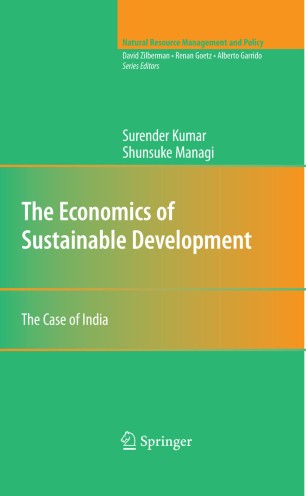 The Economics of Sustainable Development

The Case of India

This book provides a look at the current status and future potential of sustainable development in India. Macroeconomic developments, regional disparity and poverty situation, the trend in natural resource depletion and environmental degradation, trajectory of economic development, and conventional wealth are discussed. A history of environmental regulations and the current state of the environment in India are provided along with the possible reasons for non-compliance of environmental standards in the country. This book studies many different aspects of industries in India from supply and demand sides and efficiency and productivity analyses are provided in detail. Before the liberalization of its economy began in 1991, India had been one of the most over-regulated and closed economies in the world. Market productivity is examined and tests whether the post-reform period shows any improvement in productivity and efficiency in comparison to the pre-reform period. Other subjects are discussed, including the economic value that the urban population of India places on improving the air quality, the cost of sustainable industrial development, industrial water use and analysis of the relationship between the price of oil and the macro economy as it applies to India.

Technological change is vital to maintaining standards of living in modern economies with finite resources and increasingly stringent environmental goals. Successful environmental policies can contribute to efficiency by encouraging, rather than inhibiting, technological innovation. However, little research to date has focused on the design and implementation of environmental regulations that ensure productivity improvements in the face of increasing stringency of environmental regulations. This study models and measures productivity change, which is critical because energy resources are central to sustaining an economy. The traditional issues of measuring productivity change were recast by recognizing that production activity implicitly embodies joint production of market and environmental outputs. Furthermore, the Porter Hypothesis, which states that well designed environmental regulations can potentially contribute to productive efficiency in the long run by encouraging innovation, is tested using firm level data.