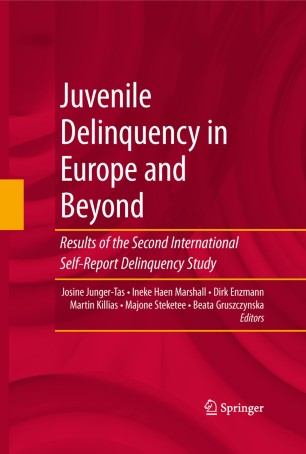 Juvenile Delinquency in Europe and Beyond

Juvenile Delinquency in Europe and Beyond: Results of the Second International Self-Report Delinquency Study presents the status of juvenile crime and delinquency and its backgrounds in many of the European Union member states as well as in the United States, Canada, Venezuela and Surinam. The book includes information on key issues in juvenile delinquency such as victimization of young people, alcohol and drug use and its relation to juvenile crime, involvement in youth gangs, immigration, family and school and neighborhood situations. It provides insight into different views on what can be considered juvenile crime; what acts are subsumed in its definition and when we can speak about structural delinquent behavior.

These insights are based on self-reported information systematically and simultaneously collected from about 70,000 12-15 year old youths in 28 countries. Until recently, the self-report methodology has not been applied on such a large scale in an international context. The results of this survey provide new and unexpected data about those young people who structurally commit criminal acts, as well as on the frequency of the behavior and the conditions that have an impact on offending.

The wealth of descriptions and insights in delinquency of all these countries will be of great interest to scholars, students and practitioners because of the special character of the publication; it is a book of reference to everyone interested in the backgrounds of juvenile delinquency.

Josine Junger-Tas studied Sociology at the Free University of Brussels (Belgium) and obtained her PhD degree in the Netherlands at the University of Groningen. She was employed by the Dutch Ministry of Justice in its Research Institute and was appointed as Director of the Institute in 1989. She was active in the Council of Europe chairing an Expert Committee on Juvenile Delinquency in 1989. In 1992, she was appointed member of its Scientific Council. She was also active in the United Nations, where she also did preparatory work for the UN Criminology congresses.

In November 2007, she received the Distinguished International Scholar Award from the American Society of Criminology.