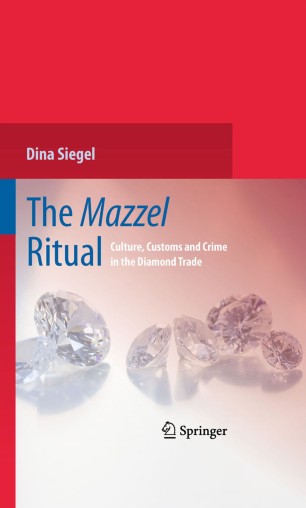 Culture, Customs and Crime in the Diamond Trade

The academic study of diamonds is as multi-faceted as the precious stones themselves. Mineralogists and geographers have written about them, as have historians and economists and students of art and fashion. They each shine their light on a different aspect of this source of luminous radiance. But who would venture to describe the entire complicated worldwide system starting in the diamond mines and ending with the consumers of Western metropolises?

In The Mazzel Ritual: Culture, Customs and Crime in the Diamond Trade, Russian-Israeli cultural anthropologist and criminologist Dina Siegel follows the route of a diamond from the mines of Africa to the shops of Europe and the United States, as it passes through countless hands and places and is smuggled, stolen, cut, polished, sold, exchanged and, finally, worn as jewelry. In the course of this long and exciting journey, a wide range of people face all sorts of risks and criminality, as well as various moral and ethical judgments. Siegel describes the range of ethnic groups that are active in the diamond trade and the culture and customs that are specific to this business. She analyses the dangers and threats to the industry and aims to uncover the strategies and tactics to deal with them. Finally, this story of risk, trust and crime examines the vulnerability of diamond production and distribution to illicit and criminal activities.

This book is about the diamond business itself as well as about those involved in it. It tells the story of people who simply cannot stay away from this expensive and alluring commodity.

Dina Siegel, originally from Kishinev in the former Soviet Union, now lives and works in the Netherlands. She received her MA in Sociology and Social Anthropology from Tel-Aviv University in Israel and her PhD in Cultural Anthropology from the Free University of Amsterdam, where until recently she held a position as an Assistant Professor in the Department of Criminology and Criminal Law. In September 2008, she became a full professor at the University of Utrecht and a professor at the Willem Pompe Institute.

Dr. Siegel’s key areas of research include global organized crime, crime and criminal justice in the former Soviet states and jewish history. Her recent study of the international diamond industry brings these various research interests together.

Publications by Dina Siegel include The Great Immigration: Russian Jews in Israel, an etnographic study of the group of over 750,000 Russian Jews who immigrated to Israel in the period between 1988 and 1996. Dr. Siegel has published several journal articles, in a.o. Springer criminology journals' Crime, Law and Social Change and Trends in Organized Crime, on post-Soviet organized crime, terrorism, human trafficking, criminal activities in the diamond sector, and on drug policies in the Netherlands.

In 2003, she edited the book Global Organized Crime. Trends and Developments with Henk van de Bunt and Damian Zaitch (Kluwer Academic Publishers, 2004). Her most recent book on this topic, Organized Crime: Culture, Markets and Policies, published with Springer in November 2007.