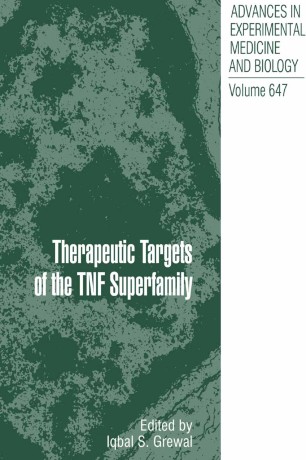 Therapeutic Targets of the TNF Superfamily

Part of the Advances in Experimental Medicine and Biology book series (AEMB, volume 647)

Tumor necrosis factor (TNF) superfamily is a rapidly growing family of cytokines that interacts with a corresponding superfamily of receptors. Ligand-receptor interactions of this superfamily are involved in numerous biological processes ranging from hematopoiesis to pleiotropic cellular responses, including activation, proliferation, differentiation, and apoptosis. The particular response depends on the receptor the cell type, and the concurrent signals received by the cell. Worldwide interest in the TNF field surged dramatically early in 1984 with the cloning and defining of the profound cellular effects of the first member of this family, TNFa. Subsequently, the major influence of TNFa on the development and functioning of the immune system was established. Today, over 20 human TNF ligands and their more than 30 corresponding receptors have been identified. Few receptors still remain orphans. What has emerged over the years is that most TNF ligands bind to one distinct receptor and some of the TNF ligands are able to bind to multiple TNF receptors, explaining to some extent the apparent disparity in the number of TNF receptors and ligands. Yet, in spite of some redundancy in TNF ligand/receptor interactions, it is clear that in vivo spatial, temporal, and indeed cell- and tissue-specific expression of both ligands and their receptors are important factors in determining the precise nature of cellular physiological and pathological processes they control.

Therapeutic Targets of the TNF Superfamily presents the state-of-the art account on the role of TNF superfamily members in the pathogenesis and their use in current intervention of cancers and autoimmune disease. This text will be highly valuable for investigators to understand the disease processes regulated by TNF superfamily members and to develop effective therapeutics. A view into the future, inspired by the comprehensive work presented in this volume, predicts that researchers studying TNF superfamily members will continue to make rapid progress in identifying relevant components to the disease process and new therapeutic strategies to target many human diseases including cancers, autoimmune disease and others.

Iqbal S. Grewal, PhD is well-known in the field of T cell co-stimulation and autoimmunity and has extensively investigated several members of the TNF superfamily and molecules important for lymphocyte co-stimulation. His research has focused on the basic molecular and cellular processes to determine the biological roles of these molecules in normal physiology and immunity and their potential utility as agents or targets for the treatment of autoimmune diseases and cancers. His experience in discovering and developing innovative protein-based biotherapeutics in many disease areas has translated some of his findings into key drug candidates for the treatment of autoimmune disease and cancers.

Dr Grewal currently holds the position of Vice President of Preclinical Therapeutics at Seattle Genetics in Bothell, Washington. He is responsible for preclinical translational research functions in support of the development of monoclonal antibodies and antibody-drug conjugates as therapeutics in the areas of autoimmunity and oncology. Before joining Seattle Genetics, Dr Grewal performed drug discovery research and preclinical development at Genentech in South San Francisco, California where he identified and validated several novel molecules as therapeutic candidates in oncology and autoimmune disease. Prior to Genentech, Dr Grewal worked at Yale University School of Medicine. Before that, he held various research positions at the University of California, Los Angeles (UCLA). Dr Grewal has presented his work at both national and international meetings, as well as published over 100 scientific publications, 75 abstracts, 60 patent applications. He is a fellow of the Royal College of Pathologists, London and member of several distinguished societies. Dr Grewal holds a PhD in Immunology from UCLA and completed his post-doctoral fellowship at Howard Hughes Medical Institute at Yale University School of Medicine.