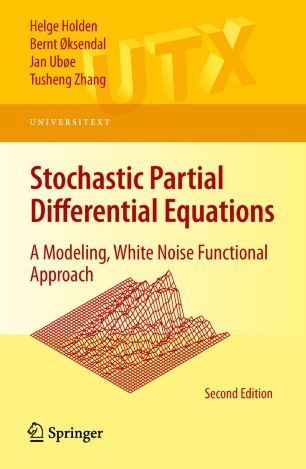 The first edition of Stochastic Partial Differential Equations: A Modeling, White Noise Functional Approach, gave a comprehensive introduction to SPDEs driven by space-time Brownian motion noise. In this, the second edition, the authors extend the theory to include SPDEs  driven by space-time Lévy process noise, and introduce new applications of the field.

Because the authors allow the noise to be in both space and time, the solutions to SPDEs are usually of the distribution type, rather than a classical random field. To make this study rigorous and as general as possible, the discussion of SPDEs is therefore placed in the context of Hida white noise theory. The key connection between white noise theory and SPDEs is that integration with respect to Brownian random fields can be expressed as integration with respect to the Lebesgue measure of the Wick product of the integrand with Brownian white noise, and similarly with Lévy processes.

The first part of the book deals with the classical Brownian motion case. The second extends it to the Lévy white noise case. For SPDEs of the Wick type, a general solution method is given by means of the Hermite transform, which turns a given SPDE into a parameterized family of deterministic PDEs. Applications of this theory are emphasized throughout. The stochastic pressure equation for fluid flow in porous media is treated, as are applications to finance.

Graduate students in pure and applied mathematics as well as researchers in SPDEs, physics, and engineering will find this introduction indispensible. Useful exercises are collected at the end of each chapter.

"The authors have made significant contributions to each of the areas. As a whole, the book is well organized and very carefully written and the details of the proofs are basically spelled out... This is a rich and demanding book… It will be of great value for students of probability theory or SPDEs with an interest in the subject, and also for professional probabilists."   —Mathematical Reviews