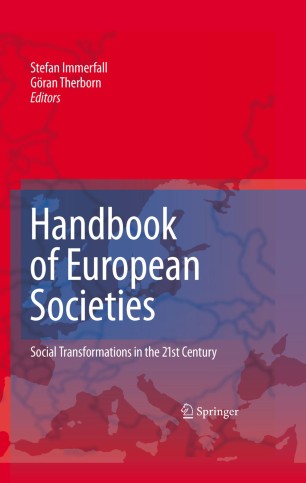 Social Transformations in the 21st Century

European integration is one of the most ambitious and socially far-reaching developments in world politics and in world economics. Against growing opposition and despite increasing social heterogeneity, the European Union continues to expand and to acquire new competences. But to what extent is the self-proclaimed "ever closer union among the peoples of Europe" a social reality? In which ways is the political European project anchored in social developments? How does social change impinge upon political integration?

Societal trends in multi-cultural, multi-ethnic, multi-lingual and socially diverse Europe have never been studied systematically. Handbook of European Societies: Social Transformations in the 21st Century sets to rectify this neglect of societal developments in Europe, providing a groundwork for the sociology of European integration. The book portrays social life and social relations in the enlarged Europe, and gives a perspective on the European Union as an evolving social entity.

Handbook of European Societies is a pioneering source book analyzing the current social patterns on the continent. It covers a representative selection of major topics of social concern and sociological relevance, such as Collective Action, Consumption, Identity, Power Structure, Sexuality, Stratification and Well-being. Each contribution probes key developments in a strictly comparative manner. The Handbook thus offers a detailed look into the intricacies of the national societies of Europe and into the prospect of an emerging European society.

The Editors have enlisted leading researchers to synthesize existing knowledge and to make use of many different data sources in a straight-forward style. The contributions stay away from jargon, simple labeling and sweeping assertions. Instead, they provide solid and accessible information on a wide variety of social trends and processes within and across European societies.

Stefan Immerfall is a Professor of Sociology at the University of Education at Schwaebisch Gmuend, Germany. He graduated from Ruhr University in Germany, and received his doctorate and his second doctorate from the University of Passau, Germany. Among his publications are Safeguarding German-American Relations in the New Century: Understanding and Accepting Mutual Differences (with Hermann Kurthen and Antonio Menendez), Europa - politisches Einigungswerk und gesellschaftliche Entwicklung (2006), The New Politics of the Right: Neo-Populist Parties and Movements in Established Democracies (with Hans-Georg Betz, 1988), Territoriality in the Globalizing Society (1998), and Die westeuropäischen Gesellschaften im Vergleich (with Stefan Hradil, 1997). Besides European integration, his research topics include political economy and political sociology.

Göran Therborn is the Director of Research and Professor and Chair Emeritus of Sociology at the University of Cambridge. Prior to that, he was the Co-Director of the Swedish Collegium for Advanced Study in the Social Sciences for 10 years, and Professor of Sociology at Göteborg University in Sweden, and Professor of Political Science at the Catholic University in The Netherlands. His writings include the following books: Science Class and Society (l976), What Does the Ruling Class Do When It Rules? (l978), The Ideology of Power of and the Power of Ideology (l980), Why Some Peoples Are More Unemployed than Others (l986), European Modernity and Beyond (l995), Between Sex and Power. Family in the World, l900-2000 (2004), Inequalities of the World (2006), and From Marxism to Postmarixsm? (2009) His works have been translated into more than twenty languages. Currently, he is pursuing comparative global studies, and in particular, a project on the capital cities of the world.