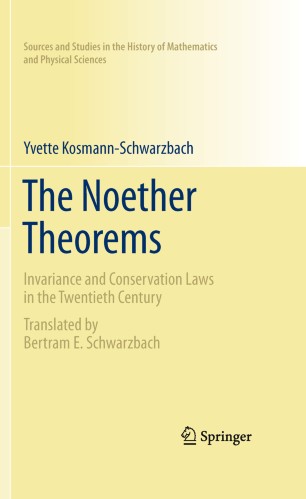 Invariance and Conservation Laws in the Twentieth Century

In 1915 Emmy Noether was invited by Klein and Hilbert to Göttingen to assist them in understanding the law of conservation of energy in Einstein’s new general theory of relativity. She succeeded brilliantly. In the Invariante Variationsprobleme, published in 1918, she proved a fundamental theorem linking invariance properties and conservation laws in any theory formulated in terms of a variational principle, and she stated a second theorem which put a conjecture of Hilbert in perspective and furnished a proof of a much more general result.

This book makes the Invariante Variationsprobleme accessible in an English translation. It presents an analysis of the work of Noether’s precursors, reformulates her argument in a more modern mathematical language, and recounts the strange history of the article’s reception in the mathematics and physics communities. This study shows how her two theorems ultimately became the basis for any deep understanding of the role of symmetries in both classical and quantum physics. The Noether Theorems, a translation of Les Théorèmes de Noether whose French text has been revised and expanded, provides rich documentation drawn from both primary and secondary sources.

This book will be of interest to historians of science, to teachers of mathematics, mechanics and physics, and to mathematicians and mathematical physicists. Also by Yvette Kosmann-Schwarzbach: Groups and Symmetries: From Finite Groups to Lie Groups, © 2010 Springer, ISBN: 978-0-387-78865-4.