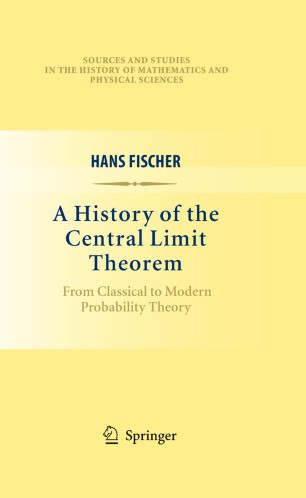 A History of the Central Limit Theorem

From Classical to Modern Probability Theory

This study aims to embed the history of the central limit theorem within the history of the development of probability theory from its classical to its modern shape, and, more generally, within the corresponding development of mathematics. The history of the central limit theorem is not only expressed in light of "technical" achievement, but is also tied to the intellectual scope of its advancement. The history starts with Laplace's 1810 approximation to distributions of linear combinations of large numbers of independent random variables and its modifications by Poisson, Dirichlet, and Cauchy, and it proceeds up to the discussion of limit theorems in metric spaces by Donsker and Mourier around 1950. This self-contained exposition additionally describes the historical development of analytical probability theory and its tools, such as characteristic functions or moments. The importance of historical connections between the history of analysis and the history of probability theory is demonstrated in great detail. With a thorough discussion of mathematical concepts and ideas of proofs, the reader will be able to understand the mathematical details in light of contemporary development. Special terminology and notations of probability and statistics are used in a modest way and explained in historical context.