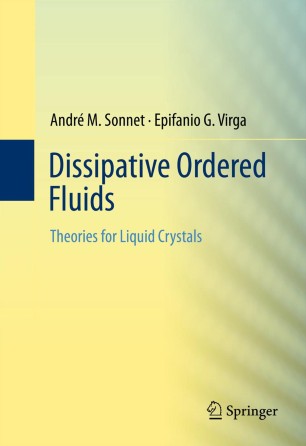 This is a book on the dissipative dynamics of ordered fluids,
with a particular focus on liquid crystals. It covers a whole
range of different theories, mainly concerned with nematic liquid
crystals in both their chiral and nonchiral variants. The authors
begin by giving a detailed account of the molecular origins of
orientational order in fluids. They then go on to develop a general
framework in which continuum theories for ordered fluids can be phrased.
Within this unified setting, they cover both well-established classical  theories and new ones with aspects that are not yet completely settled.  The book treats a wide range of hydrodynamic theories for liquid crystals, from the original 1960s works by Ericksen and Leslie to new, fast-developing  ideas of liquid crystal science. The final chapter is devoted to  nematoacoustics and its applications. Old experiments on the propagation of  ultrasound waves in nematic liquid crystals are interpreted and explained
in the light of a new theory developed within the general theoretical  infrastructure proposed in the body of the book.

This book is intended both for graduate students and professional
scholars in mathematics, physics, and engineering of advanced
materials. It delivers a solid framework for liquid crystal
hydrodynamics and shows the unifying concepts at the basis of the
classical theories. It illustrates how these concepts can also be
applied to a wide variety of modern topics.

Andre M. Sonnet is in the Department of Mathematics and Statistics at  the University of Strathclyde, Glasgow (Scotland) and Epifanio G.
Virga is in the Department of Mathematics at the University of Pavia (Italy). They have a long history of working together in liquid crystal science and have contributed, in particular, to the theories of
defects and biaxial nematics.

“This book is a collection of theoretical results about nematic liquid crystals. From molecular field theories to continuum mechanics, it envisages liquid crystals as examples of ordered fluids. … the book is certainly well written and clear and may be of help to both mathematicians and physicists wishing to widen their knowledge of liquid crystal science.” (Giovanni De Matteis, Mathematical Reviews, January, 2013)