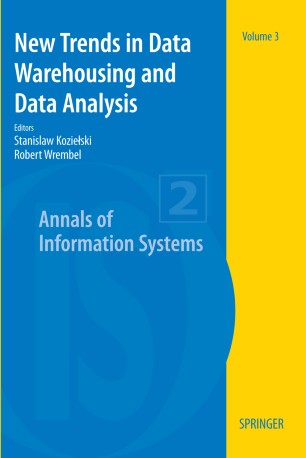 Most of modern enterprises, institutions, and organizations rely on knowledge-based management systems. In these systems, knowledge is gained from data analysis. Nowadays, knowledge-based management systems include data warehouses as their core components. The purpose of building a data warehouse is twofold. Firstly, to integrate multiple heterogeneous, autonomous, and distributed data sources within an enterprise. Secondly, to provide a platform for advanced, complex, and efficient data analysis. Data integrated in a data warehouse are analyzed by the so-called On-Line Analytical Processing (OLAP) applications designed among others for discovering trends, patterns of behavior, and anomalies as well as for finding dependencies between data. Massive amounts of integrated data and the complexity of integrated data that more and more often come from WEB-based, XML-based, spatio-temporal, object, and multimedia systems, make data integration and processing challenging.

The objective of NEW TRENDS IN DATA WAREHOUSING AND DATA ANALYSIS is fourfold: First, to bring together the most recent research and practical achievements in the DW and OLAP technologies. Second, to open and discuss new, just emerging areas of further development. Third, to provide the up-to-date bibliography of published works and the resource of research achievements for anyone interested in up-to-date data warehouse issues. And, finally, to assist in the dissemination of knowledge in the field of advanced DW and OLAP.

Stanislaw Kozielski works as a professor at the Silesian University of Technology, Poland.  In 1977 he earned his Ph.D. in computer science (model building for information systems). In 1988 he received the D.Sc. in computer science (database design), and in 1997 he received the professor title in computer science. Between 1971-1991 and 2002-2007 he took part in several research, academic and industrial projects on software tools design, databases, information systems design, and information technologies. Between 1991-1996 he was the vice-dean and in 1996-2002 he was the dean of the Faculty of Automatic Control, Electronics and Computer Science of the Silesian University of Technology. His main research areas encompass databases (design, query languages), data warehouse technologies (efficiency, multidimensional modeling), and distributed processing (database query).

Dr. hab. Robert Wrembel is an Assistant Professor in the Institute of Computing Science at Poznan University of Technology, Poland. In 2008 he received the post-doctoral degree in computer science, specializing in database systems and data warehouses. He was elected a deputy dean of the Faculty of Computing Science and Management for the period Sept. 2008 - Aug. 2011. Since 1996 he has been actively involved in five research projects on databases and four industrial projects in the field of information technologies. He has paid a number of visits to research and education centers, including INRIA Paris-Rocquencourt (France), the Paris Dauphine University (France), Klagenfurt University (Austria), and Loyola University (USA). His main research interests encompass data warehouse technologies (temporal, multiversion, object-relational) and object-oriented systems (views, data access optimization, methods and views materialization).