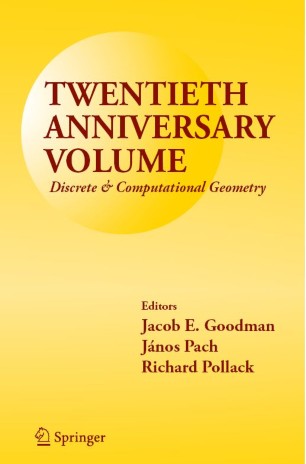 This commemorative book contains the 28 major articles that appeared in the 2008 Twentieth Anniversary Issue of the journal Discrete & Computational Geometry, and presents a comprehensive picture of the current state of the field. Formed during the past few decades by the merger of the classical discipline of combinatorial and discrete geometry with the new field of computational geometry that sprang up in the 1970s, discrete and computational geometry now claims the allegiance of a sizeable number of mathematicians and computer scientists all over the world, whose most important work has been appearing since 1986 in the pages of the journal.

The articles in this volume, a number of which solve long-outstanding problems in the field, were chosen by the editors of DCG for the importance of their results, for the breadth of their scope, and to show the intimate connections that have arisen between discrete and computational geometry and other areas of both computer science and mathematics. Apart from the articles, the editors present an expanded preface, along with a set of photographs of groups and individuals who have played a major role in the history of the field during the past twenty years.

Jacob Goodman, Richard Pollack and János Pach are each distinguished professors and authors in their own right, and together they are the pre-eminent founders and editors-in-chief of the journal, Discrete & Computational Geometry. Over the 20 years since the founding of this premiere journal, it has become synonymous with the field of discrete and computational geometry itself.