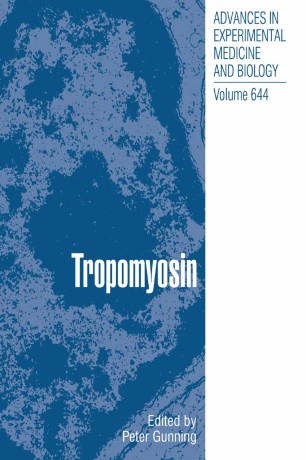 Part of the Advances in Experimental Medicine and Biology book series (AEMB, volume 644)

A recent review of one of my grant applications commented on the ‘rediscovery of tropomyosin’. I was tempted to write back in my rebuttal to the reviewer that I didn’t realise it had been lost. Uncharacteristic maturity prevailed and I resisted the temptation, but I was struck by the underlying observation that research on the str- ture and function of tropomyosin has been somewhat invisible, particularly in terms of the cytoskeleton isoforms. So, how can it be that one of the two major components of the actin filament has been so thoroughly overlooked? I suspect that the answer is disappointingly pedestrian. Whereas the biochemistry of the 1980s revealed the potential of tropomyosin isoforms to diversify the function of actin filaments, the subsequent disenchantment with isoform biology in general in the 1990s inhibited growth of this field. With the development of more sophisticated experimental - proaches we are now seeing a growing realisation of the importance of tropomyosin in regulating actin filaments beyond its pivotal role in muscle contraction. The opportunity to edit this book came at a time when we had written several reviews on different aspects of tropomyosin function and I had just finished the background reading for a comprehensive review of tropomyosin biology. I realised that the field was simply beyond the capacity of any one person to do the field j- tice.