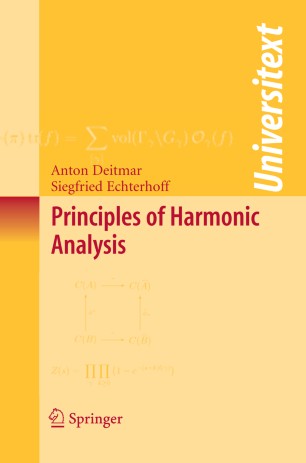 The present book is intended as a text for a graduate course on abstract harmonic analysis and its applications. The book can be used as a follow up to Anton Deitmer's previous book, A First Course in Harmonic Analysis, or independently, if the students already have a modest knowledge of Fourier Analysis. In this book, among other things, proofs are given of Pontryagin Duality and the Plancherel Theorem for LCA-groups, which were mentioned but not proved in A First Course in Harmonic Analysis. Using Pontryagin duality, the authors also obtain various structure theorems for locally compact abelian groups. The book then proceeds with Harmonic Analysis on non-abelian groups and its applications to theory in number theory and the theory of wavelets.

Knowledge of set theoretic topology, Lebesgue integration, and functional analysis on an introductory level will be required in the body of the book. For the convenience of the reader, all necessary ingredients from these areas have been included in the appendices.