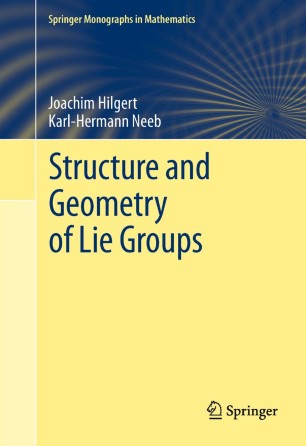 Structure and Geometry of Lie Groups

This text is designed as an introduction to Lie groups and their actions on manifolds, one that is accessible both to a broad range of mathematicians and to graduate students. Building on the authors' Lie-Gruppen und Lie-Algebren textbook from 1991, it presents the fundamental  principles of Lie groups while incorporating the past 20 years of the authors' teaching and research, and giving due emphasis to the role played by differential geometry in the field. The text is entirely self contained, and provides ample guidance to students with the presence of many exercises and selected hints.

The work begins with a study of matrix groups, which serve as examples to concretely and directly illustrate the correspondence between groups and their Lie algebras. In the second part of the book, the authors investigate the basic structure and representation theory of finite dimensional Lie algebras, such as the rough structure theory relevant to the theorems of Levi and Malcev, the fine structure of semisimple Lie algebras (root decompositions), and questions related to representation theory. In the third part of the book, the authors turn to global issues, most notably the interplay between differential geometry and Lie theory. Finally, the fourth part of the book deals with the structure theory of Lie groups, including some refined applications of the exponential function, various classes of Lie groups, and structural issues for general Lie groups. To round out the book's content, several appendices appear at the end of this last part.

Containing a wealth of useful information, including new results, Structure and Geometry of Lie Groups provides a unique perspective on the study of Lie groups and is a valuable addition to the literature. Prerequisites are generally kept to a minimum, and various pedagogical features make it an excellent supplemental text for graduate students. However, the work also contains much that will be of interest to more advanced audiences, and can serve as a useful research reference in the field.