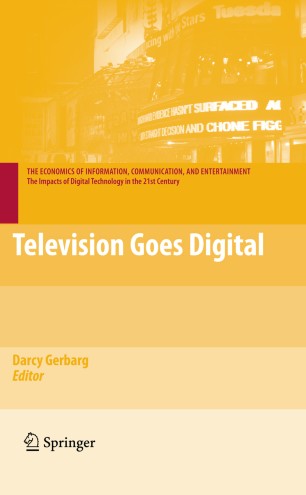 Part of the The Economics of Information, Communication and Entertainment book series (ECOINFORM, volume 01)

Television has become a ubiquitous part of our lives, and yet its impact continues to evolve at an extraordinary pace. The evolution of television from analog to digital technology has been underway for more than half a century. Today's digital technology is enabling a myriad of new entertainment possibilities. From jumbotrons in cyberspace to multi-dimensional viewing experiences, digital technology is changing television. Consequently, new advertising metrics that reflect the new viewer habits are emerging. The ability to capture a viewer's interactions changes the advertising proposition. Telephone and wireless companies are challenging the traditional mass media providers—broadcasters, cable and satellite companies—and they’re all finding ways to deliver TV programming, video content and Internet offerings to large and small screens in the home and on the go.

This volume showcases insights from industry insiders and researchers from a variety of disciplines. It explores the economic, cultural, technical, and policy implications of digital television, addressing such questions as: How will content be monetized in the future? What programming opportunities become possible with the advent of going digital? Will content still be king or will the conduits gain the upper hand? This book analyzes the digital television evolution: its impacts on the economics of the TV industry, its significance for content creation from Hollywood blockbusters to You Tube, the changing role of the consumer, and what's coming next to a theatre near you.

Darcy Gerbarg has been a Senior Fellow at the Columbia Institute for Tele Information (CITI), Columbia University Business School since 1997 and presently teaches Digital Television at New York University. She also serves as Vice President of Business Development for CineGrid, Inc., a research organization, and she is a past Executive Director of the Marconi Society, Inc.; both public not-for-profit corporations. Prior to that she held research positions at Courant Institute for Mathematical Sciences, New York University and the Computer Graphics Lab at New York Institute of Technology. She has been an adjunct faculty member at the Interactive Telecommunications Graduate Program and the Film and Television Departments at New York University and the State University of New York at Stony Brook. A pioneer in computer art, she started and directed the graduate program in Computer Art and the Computer Institute for the Arts at the School of Visual Arts, and was Chairman of the first Computer Art Shows for the Special Interest Group in Graphics (SIGGRAPH) of the Association for Computing Machinery (ACM). She has lectured, organized, and conducted panels, workshops and presentations internationally for industries, companies and universities. Conferences she has organized for CITI include The Future of Digital TV and Venture Capital in New Media. Her edited publications include The Economics, Technology and Content of Digital TV (Kluwer, 1999), Internet TV (Lawrence Erlbaum, 2003), and The Marconi Century (Guglielmo Marconi International Fellowship Society, New York, 2004/5).