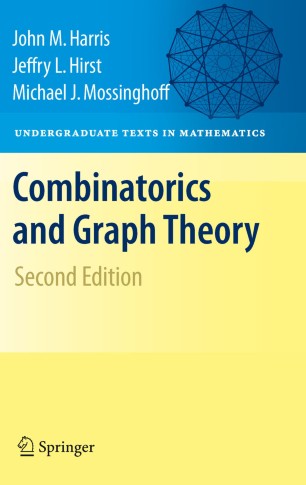 This book covers a wide variety of topics in combinatorics and graph theory. It includes results and problems that cross subdisciplines, emphasizing relationships between different areas of mathematics. In addition, recent results appear in the text, illustrating the fact that mathematics is a living discipline.

The second edition includes many new topics and features:

• New material on partitions, multinomial coefficients, and the pigeonhole principle.

• Expanded coverage of Pólya Theory to include de Bruijn’s method for counting arrangements when a second symmetry group acts on the set of allowed colors.

• Topics in combinatorial geometry, including Erdos and Szekeres’ development of Ramsey Theory in a problem about convex polygons determined by sets of points.

• Numerous new exercises throughout the book.

About the First Edition:

". . . this is what a textbook should be! The book is comprehensive without being overwhelming, the proofs are elegant, clear and short, and the examples are well picked."

"The narrative and proofs are well written, and the authors are given to frequent uses of humor. Students should find this book as easy to read as any other good-quality text written with them in mind. Each of the three chapters concludes with several paragraphs describing an excellent selection of more advanced texts or papers to consider for further study"

“Any undergraduate work in combinatorics or graph theory, whether a course or independent study, would likely be well served by this textbook … . The authors offer a wide selection of topics, often in more depth than other undergraduate texts, in an engaging and clear style. … Each chapter concludes with extensive notes on further reading.” (Brian Hopkins, Mathematical Reviews, Issue 2010 b)

“Combinatorics and Graph Theory is a popular pair of topics to choose for an undergraduate course. … The book is written in a reader-friendly style and there are enough exercises. … It is certainly good that someone took the effort to write … in a form that is appropriate for undergraduates. … the book will most often be used for a reading class by a student who already has a background in combinatorics and who wants to learn about the set theoretical aspect of it.” (Miklós Bóna, SIGACT News, Vol. 40 (3), 2009)

“This undergraduate textbook contains three chapters: Graph Theory, Combinatorics and Infinite Combinatorics and Graphs. … There is a short section on References in each chapter introducing briefly other books dealing with the topics covered in the respective chapter. A full list of 293 references, about 550 exercises and an index with 13 pages are also provided.” (Dalibor Froncek, Zentralblatt MATH, Vol. 1170, 2009)