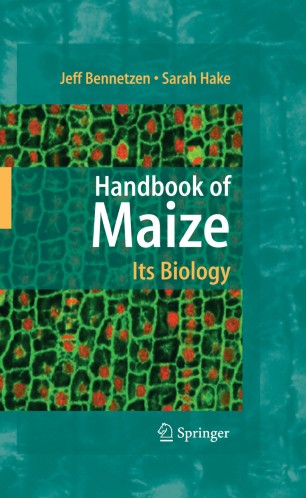 Handbook of Maize: Its Biology

Maize is one of the world’s highest value crops, with a multibillion dollar annual contribution to agriculture. The great adaptability and high yield of maize as a food, feed and forage crop have led to its production on a massive scale, with acreage expanding at the expense of other crops. Maize has developed in its non-food usage, comprising a major source of ethanol for fuel in the United States. In addition, maize has occupied center stage in the transgenic plant controversy, serving as one of the first food crops with commercialized transgenic varieties. The release of the genome sequence of maize in 2008 will indicate the structure and gene content of the first average-size plant genome and will be the most complex genome sequenced from any organism to date.

Beyond its major agricultural and economic contributions, maize has been a model species for genetics since it was the first plant to have a genetic map, initially published by Emerson and colleagues in 1935. Such central genetic phenomena as transposable elements, nucleolar organizers, telomeres and epigenetic gene regulation were discovered first in maize, and later found to be universal eukaryotic genome properties. These key genetic contributions continue, including taking the lead in the characterization of the evolution of the highly unstable genomes so common in flowering plants.

Among plant science researchers, maize has the second largest research community, trailing only the Arabidopsis community. Despite the size and scope of this community, a comprehensive book on the biology of maize – targeting genetics, genomics or overall biology - has not been published. Hence, a modern and comprehensive volume on the status (and future) of maize as a species for biological study is highly warranted.

Handbook of Maize: Its Biology centers on the past, present and future of maize as a model for plant science research and crop improvement. The book includes brief, focused chapters from the foremost maize experts and features a succinct collection of informative images representing the maize germplasm collection.

Jeff Bennetzen, Ph.D. is the Norman and Doris Giles Professor of Molecular Biology and Functional Genomics at the University of Georgia, and is also a Georgia Research Alliance Eminent Scholar. He has studied the structure and evolution of the maize genome for the last 28 years.

Sarah Hake, Ph.D. is the Center Director of the Plant Gene Expression Center of the United States Department of Agriculture – Agricultural Research Service and University of California, Berkeley. She is also an adjunct Professor in the Department of Plant and Microbial Biology at U. C. Berkeley. She has worked on maize throughout her scientific career.