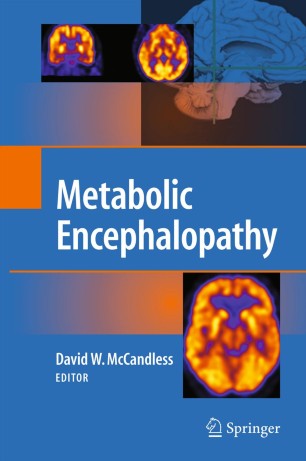 Metabolic Encephalopathy is meant to combine and correlate animal and human studies. In many cases, alterations in the neurochemistry of humans and experimental animal models is similar. It is hoped that increased awareness of the importance of early diagnosis and treatment of these disorders may result in a lowering of the incidence of structural changes and morbidity. These metabolic encephalopathies hold a special fascination for both basic scientists and clinical investigators because they are accessible, treatable, and there exist good animal models for further study. Therefore, this book assembles both basic and clinical neuroscience issues in the treatment of specific metabolic encephalopathies such as uremia, Wernicke’s disease, epilepsy, stroke, hepatic encephalopathy, pediatric encephalopathies, inborn errors of metabolism, toxins such as lead, depression, cerebral infections, kernicterus, Wilson disease, and many others.

Dr. David W. McCandless is the John J. Sheinin Professor of Anatomy in the Department of Cell Biology and Anatomy at The Chicago Medical School, Rosalind Franklin University, North Chicago, IL. He has over 35 years of laboratory research into basic mechanisms of various metabolic encephalopathies. He serves as Editor-in Chief of the journal Metabolic Brain Disease (Springer), now in its 23rd year. Dr. McCandless has been on the faculty or research staff at The University of Vermont College of Medicine, NIH-NINCDS, University of Texas Medical School at Houston, and The Chicago Medical School, and was a visiting professor at Washington University School of Medicine. Dr. McCandless has published in journals such as The J. Clinical Investigation, Nature, Proc. National Academy of Sciences, Amer. J. of Physiology, Brain Research, J. Neurochemistry, Teratology, Epilepsia, Stroke, and many others. This is his third edited book.

"This book summarises a wealth of information on several neurological disorders from animal models to human conditions … . This approach provides the book with a useful role for continuous education of general neurologists and for introducing neurological diseases to trainees in a modern way. … this book helps to increase awareness of the importance of early diagnosis and treatment of these disorders, which can reduce the incidence of structural brain changes and morbidity." (Antonio Federico, The Lancet Neurology, Vol. 8, August, 2009)