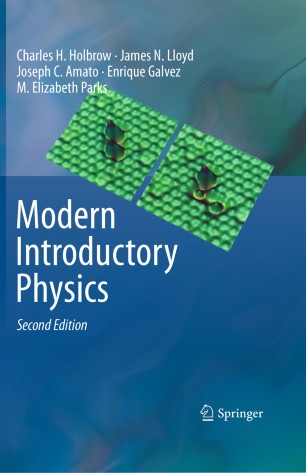 Modern Introductory Physics, 2nd Edition, by Charles H. Holbrow, James N. Lloyd, Joseph C. Amato, Enrique Galvez, and Beth Parks, is a successful innovative text for teaching introductory college and university physics. It is thematically organized to emphasize the physics that answers the fundamental question: Why do we believe in atoms and their properties?  The book provides a sound introduction to basic physical concepts with particular attention to the nineteenth- and twentieth-century physics underlying our modern ideas of atoms and their structure.

After a review of basic Newtonian mechanics, the book discusses early physical evidence that matter is made of atoms.  With a simple model of the atom Newtonian mechanics can explain the ideal gas laws, temperature, and viscosity.  Basic concepts of electricity and magnetism are introduced along with a more complicated model of the atom to account for the observed electrical properties of atoms. The physics of waves---particularly light and x-rays---and basic features of relativity are explored and used to reveal further details of atomic structure.  Following the discovery of radioactivity, transmutation, and the atomic nucleus, Bohr’s model of the hydrogen atom sets the stage for a view of the atom that becomes fully modern with the introduction of the ideas of quantum mechanics.  This book presents these ideas in terms of the Heisenberg uncertainty principle and Feynman’s rules of quantum mechanics and also discusses the intriguing topics of entanglement, non-locality, and Bell’s inequalities.  Here, as everywhere in this book, there is strong emphasis on experiments and observable phenomena that have shaped and confirmed the concepts of physics.

To help students make a good transition from high-school physics to university physics, this book fosters quantitative skills: There is much use of order-of-magnitude calculations, scaling arguments, proportionalities, approximations, and other basic tools of quantitative reasoning, progressing from simple and direct applications in the early parts of the book to more elaborate ones later.   The book shows how new physics and new ideas are inferred from experimental data and quantitative reasoning.  A large number of exercises and problems help students clarify their understanding.

Modern Introductory Physics, 2nd Edition, is an extensive revision of the original influential and innovative introductory text.  This new edition includes:
- improved exposition of some difficult topics
- two new chapters that explore important and intriguing ideas of quantum mechanics in the context of real experiments
- many updated problems for students
- new questions added to many chapters

Charles H. Holbrow is a professional physicist who for over forty years has taught physics to undergraduates, chiefly at Colgate University but also at Caltech, Haverford College, Cornell University, the University of Wisconsin at Madison, MIT, Harvard University, and the University of Vienna. His research in nuclear physics and at the interface between nuclear and atomic physics has numerous publications in leading physics journals. He has been Vice President, President Elect, President (2003) and Past President of the American Association of Physics Teachers. AAPT has awarded him a Certificate of Appreciation of his service; Harvard University has awarded him a Certificate of Distinction in Teaching; he is a Fellow of the American Physical Society. Beth Parks is a physicist with ten years of experience teaching physics to undergraduates at Colgate University. Her research in experimental condensed matter physics has been published in leading scientific journals and supported by four grants from the National Science Foundation and one from Research Corporation. She has also received two National Science Foundation grants in support of educational programs, including one that funded a summer camp designed to interest 14-17-year-old girls in science by letting them explore the science of automobiles. She has been active in science outreach programs both at the K-12 level and to the general public.

“Strength of this book’s treatment is that atoms are used to link … branches of physics, enabling undergraduates to develop a more coherent understanding of the field. … a helpful summary of the material covered, longer problems are given at the end of each chapter. … The layout is clear and contains many illustrative figures. … I recommended this book as a brave attempt to inject modern physics into the very start of undergraduate life. … First-year undergraduates or advanced A-level students seeking extra material.” (Times Higher Education, May, 2011)

“Holbrow and colleagues (all, Colgate Univ.) designed this book … for the first course of an innovative three-semester introductory physics sequence at Colgate. … serves to introduce students to contemporary physics quickly. … Even experienced faculty will gain valuable classroom insight from the presentation … . a physics textbook for majors, many general readers with a high school background in math and physics would find it an accessible introduction to these topics. Summing Up: Recommended. Lower-division undergraduates, advanced high school students, and general readers.” (J. R. Burciaga, Choice, Vol. 48 (9), May, 2011)