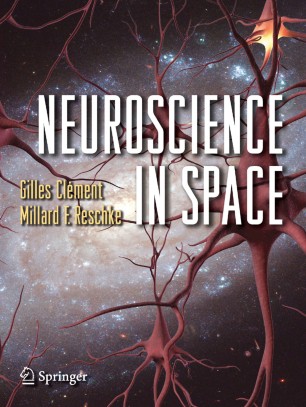 This book offers an overview of neuroscience research performed in space since the observations made during the first manned space flights to the detailed scientific investigations currently being carried out onboard the International Space Station. This book is for the general scientific reader. Each project and the reason why it was done is described with illustrations, rationale and hypothesis, and a summary of results. Also, reference lists guide readers to the published papers from experiments. This book is a legacy of what we have learned on brain mechanisms and functions through research done in space, and a guide for what could be investigated in the future.

Dr. Millard (Mill) Reschke (left) and Dr. Gilles Clément (right), have conducted research primarily in the areas of spatial orientation, sensorimotor function, postural ataxia, space motion sickness, and visual-vestibular performance. Dr. Clément is Director of Research at the French National Center for Scientific Research (CNRS) in Toulouse, France. Dr. Reschke is NASA's Senior Neuroscientist and sensorimotor science lead at the Johnson Space Center, Houston, Texas. Both together and individually they have participated as investigators for experiments on nearly 100 different space flights ranging from the Apollo missions, Skylab, Shuttle, Salyut, Mir, and the International Space Station. They are currently involved with developing sensorimotor countermeasures for long-duration space flight, experiments on board the ISS and assisting with preparations for the future lunar and Mars flights.