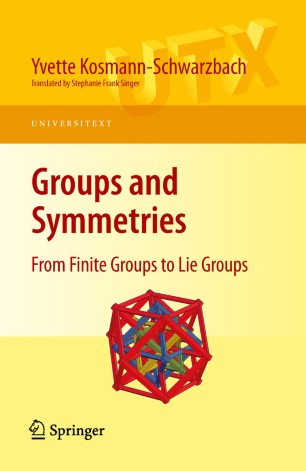 From Finite Groups to Lie Groups

Unlike many other texts, this book deals with the theory of representations of finite groups, compact groups, linear Lie groups and their Lie algebras, concisely and in one volume.

• Brisk review of the basic definitions of group theory, with examples

• Detailed study of SO(3) and SU(2), and their representations

• Representations of SU(3), roots and weights, with quark theory as a consequence of the mathematical properties of this symmetry group

This book is illustrated with portraits and a few historical remarks.  With only linear algebra and calculus as prerequisites, Groups and Symmetries: From Finite Groups to Lie Groups is accessible to advanced undergraduates in mathematics and physics, and will still be of interest to beginning graduate students. Exercises for each chapter and a collection of problems with complete solutions make this an ideal text for the classroom and for independent study.

A former student of the École Normale Supérieure, Yvette Kosmann-Schwarzbach holds a Doctorat d’État in mathematics as well as a degree in physics from the University of Paris. She has been a professor of mathematics at the University of Lille, at Brooklyn College of the City University of New York, and most recently at the École Polytechnique (France). She has organized numerous conferences, and has held visiting positions and lectured on four continents.

The author of the forthcoming historical study, The Noether Theorems. Invariance and Conservation Laws in the Twentieth Century (Sources and Studies in the History of Mathematics and Physical Sciences), she has published some 70 research articles in differential geometry, algebra and mathematical physics, and has also co-edited The Verdier Memorial Conference on Integrable Systems (Progress in Mathematics), Integrability of Nonlinear Systems (Lecture Notes in Physics) and Discrete Integrable Systems (Lecture Notes in Physics).

“Groups and Symmetries is a short, concise book … that provides an introduction to the subject of Lie Groups, Lie Algebras, their representations, and their uses in theoretical particle physics. … Anyone interested in understanding the connection between quarks and representation theory is an expeditious fashion should read this book. … at the end of each chapter, Groups and Symmetries has a helpful reference section that provides readers with historical comments and additional references to the topics covered.” (Thomas R. Hagedorn, The Mathematical Association of America, April, 2010)

“This book by Kosmann-Schwarzbach (École Polytechnique, France) also starts with the basics but rapidly moves on to enrich group theory with notions from topology, analysis, and (multi) linear algebra. Surely one finds many monographs on Lie groups for students on the way to specializing. … Summing Up: Recommended. Upper-division undergraduates, graduate students, and professionals.” (D. V. Feldman, Choice, Vol. 47 (11), July, 2010)

“This book gives a gentle introduction to the theory of group representations and its applications in quantum mechanics. … This book is well written and is well suited for a course aimed at advanced undergraduates and early graduate students.” (Aloysius Helminck, Mathematical Reviews, Issue 2011 g)

“The author gives a very clear and comprehensible introduction to the representation theory of groups focussing in particular on Lie groups. … A series of nine problems and solutions completes this well thought-out and well organized book, which can be recommended already to advanced undergraduates.” (G. Kowol, Monatshefte für Mathematik, Vol. 164 (2), October, 2011)