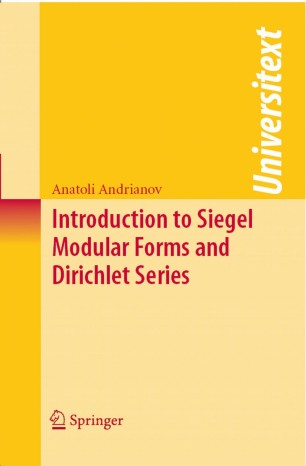 * New, simplified approaches and a fresh outlook on classical problems

* The action of Hecke operators on Siegel modular forms

Anatoli Andrianov is a leading researcher at the St. Petersburg branch of the Steklov Mathematical Institute of the Russian Academy of Sciences. He is well known for his works on the arithmetic theory of automorphic functions and quadratic forms, a topic on which he has lectured at many universities around the world.

"Introduction to Siegel Modular Forms and Dirichlet Series is a compact but masterful presentation of this important generalization of the classical theory, and a good deal more. … beneficiaries of this wonderful book are the obvious candidates: students of number theory with their qualifying examinations behind them, or very gifted undergraduates who have already learned group theory and complex analysis, some topology, some rings and fields, and so on." (Michael Berg, The Mathematical Association of America, May, 2009)

“Andrianov … offers a comparatively concrete, lowbrow treatment of Siegel modular forms, a large and important but still special class of higher-dimensional modular forms. Readers familiar with standard accounts of the one-dimensional story will find the flow and organization here comfortingly familiar … . Andrianov has suppressed entirely the vantage of algebraic geometry, presumably for simplicity. … Summing Up: Highly recommended. Upper-division undergraduate through professional collections.” (D. V. Feldman, Choice, Vol. 47 (4), December, 2009) “The book under review is a concise and self-contained introduction to the Hecke theory of Siegel modular forms and zeta functions and is suitable for beginners. … Siegel modular form is introduced and its analytic properties are investigated.” (Hidenori Katsurada, Mathematical Reviews, Issue 2010 f)
Buy options