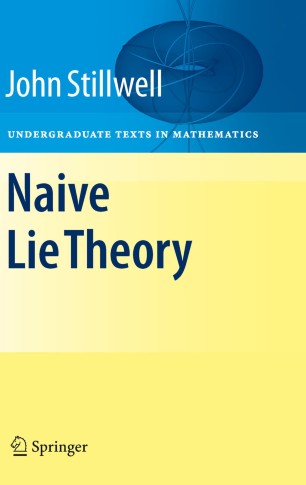 In this new textbook, acclaimed author John Stillwell presents a lucid introduction to Lie theory suitable for junior and senior level undergraduates. In order to achieve this, he focuses on the so-called "classical groups'' that capture the symmetries of real, complex, and quaternion spaces. These symmetry groups may be represented by matrices, which allows them to be studied by elementary methods from calculus and linear algebra.

This naive approach to Lie theory is originally due to von Neumann, and it is now possible to streamline it by using standard results of undergraduate mathematics. To compensate for the limitations of the naive approach, end of chapter discussions introduce important results beyond those proved in the book, as part of an informal sketch of Lie theory and its history.

John Stillwell is Professor of Mathematics at the University of San Francisco. He is the author of several highly regarded books published by Springer, including The Four Pillars of Geometry (2005), Elements of Number Theory (2003), Mathematics and Its History (Second Edition, 2002), Numbers and Geometry (1998) and Elements of Algebra (1994).

“An excellent read. In just 200 pages the author explains what Lie groups and algebras actually are. … An undergraduate who has taken the calculus series, had a course in linear algebra that discusses matrices, has some knowledge of complex variables and some understanding of group theory should easily follow the material to this point. … the best book to get you going.” (Philosophy, Religion and Science Book Reviews, bookinspections.wordpress.com, July, 2013)

“There are several aspects of Stillwell’s book that I particularly appreciate. He keeps the sections very short and straightforward, with a few exercises at the end of each to cement understanding. The theory is built up in small bites. He develops an intuition for what is happening by starting with very simple examples and building toward more complicated groups. … In short, if you want to teach an undergraduate course on Lie theory, I recommend Stillwell.”(David Bressoud, The UMAP Journal, Vol. 31 (4), 2010)

"This book provides an introduction to Lie groups and Lie algebras suitable for undergraduates having no more background than calculus and linear algebra. … Each chapter concludes with a lively and informative account of the history behind the mathematics in it. The author writes in a clear and engaging style … . The book is a welcome addition to the literature in representation theory." (William M. McGovern, Mathematical Reviews, Issue 2009 g)

"This is a beautifully clear exposition of the main points of Lie theory, aimed at undergraduates who have … calculus and linear algebra. … The book is well equipped with examples … . The book has a very strong geometric flavor, both in the use of rotation groups and in the connection between Lie algebras and Lie groups." (Allen Stenger, The Mathematical Association of America, October, 2008)