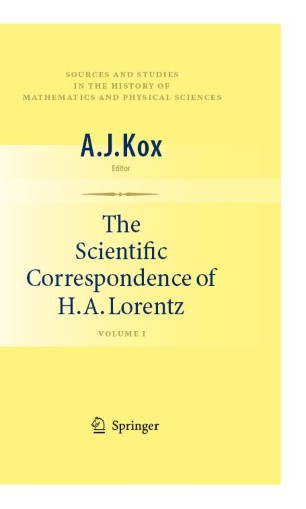 The Scientific Correspondence of H. A. Lorentz

This book presents a selection of 434 carefully annotated letters from and to the Dutch physicist and Nobel Prize winner Hendrik Antoon Lorentz (1853-1928), covering the period from 1883 until a few months before his death in February 1928. Most of these letters are of a scientific nature, with the exception of letters between Lorentz and Albert Einstein, Max Planck, Woldemar Voigt, and Wilhelm Wien during World War I, since these letters shed important light on the disruption of scientific relations during the war and on the political views of these correspondents as well as of Lorentz.

The letters are being reproduced in their original language (German, French and English), and a few Dutch drafts are accompanied by English translations.

A concise biography of Lorentz is also included, as well as a full bibliography of his writings.

“[This volume] of Lorentz’s correspondence is highly valuable sources for the working historian of science and for the curious (linguistically adept) physicist. They are astonishing witnesses to the greatness of a man whom most physicists of his time loved and learned from.” (Olivier Darrigol, Isis, Vol. 110 (4), 2019)
Buy options